Was it safe for Romo to return?

Based on evaluation of mechanism, Romo was not seriously injured and it was safe for him to return. A direct blow with a knee to the back can cause significant pain, but is unlikely to cause significant injury. The disc and spinal nerves are very deep and well protected. The flexion, rotation and compression forces on the Romo hit appeared to be minimal. This type of injury did not cause a re-herniation of his disc.

The on-field evaluation by the Cowboys medical staff did not cause enough concern to immobilize or spine board Romo, as is protocol if there is nerve or structural concern. Although he was down a considerable amount of time, much of that was to allow for a full-on field evaluation. The combination of how Romo was injured and how he was allowed to walk off the field is very telling.

This is a case where video tells you a lot about the injury. I am not an advocate making definitive diagnosis or treating players without hands-on examination and access to imaging studies, but film can tell you a lot. For 17 years, I would look at injury video of how players got hurt on Monday morning after a game. Late in my NFL career, video was available on the sidelines and I often would look at mechanisms of injury in real time. It was never a replacement for examination, but it was a helpful augment.

The good news for Cowboys fans is that there does not appear to be any structural damage to Romo's back.

Owner/general manager Jerry Jones acknowledged that the Cowboys medical staff used video as part of their medical evaluation, stating, “When we looked at the play and saw that it was a knee, kinda (sic) to the side of the back, then we felt better about it.” Of course the examination was their primary focus, but here is an example where video can help.

As part of the locker room evaluation, Romo certainly had immediate imaging to rule out transverse or spinous process fracture. Every NFL stadium is mandated to have X-ray facilities and a technician is present 90 minutes before a game until an hour after.

Undoubtedly, Romo will undergo an MRI Tuesday to confirm the contusion and rule out other injury. Jerry’s “Taj Mahal” stadium does not have a MRI machine. Only one stadium (Cincinnati) does and that is used as a public imaging center on non-game days. Kansas City has an MRI machine in its practice facility across the stadium parking lot. Regardless, I do not expect any surprises based on the MRI findings.

A knee to the back cannot cause paralysis. In fact, the spinal cord ends above the area where there was contact. If there were any doubt of a spinal cord, nerve injury or fracture, Romo would not have been allowed to walk off the field. His spine surgeon was on the field immediately after the play and participated in the decision-making.

Romo returned to play and there is no question that players should not be allowed to talk their way back into a game if there is a risk of re-injury of permanent damage. I don’t believe that existed here. Romo certainly could have aggravated the swelling or taken another hit, but there was no structural damage as confirmed after the game. Certainly, the player was seen speaking to the Cowboys doctors, but that is a good thing. There is nothing to indicate that Romo in any way persuaded the team doctors to do something they felt was unsafe. In my orthopedic career, no player, agent, coach, general manager or owner ever persuaded me to do something I was not comfortable with and I am sure that to be the case for the well respected Cowboys team doctors.

Once a player passes medical clearance, he still needs the coach’s approval. If Romo were deemed ineffective, that would be a coaching decision. The fact that some fans and analysts say Romo shouldn’t have returned because backup Brandon Weeden was doing well and Romo was ineffective is a coaching decision, not medical one.

There certainly were some unusual dynamics regarding this situation. It is not the norm to have the owner or general manager on the sideline during games. I have never experienced that (other than the final two minutes, and even then, not in the box) in almost two decades with two different teams. I have never seen my owner or general manager speaking to a coach during a game. It was certainly out of the ordinary to have the owner/general manager appearing to provide injury updates to the head coach. This, in itself, doesn’t mean any protocol was broken or Romo was put at risk. 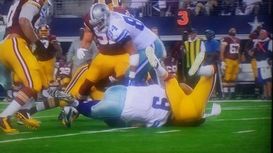 Romo's back pad certainly helped to absorb some of the blow.</p>

Romo did acknowledge that he took an injection before he returned. That shot was likely Toradol, a strong anti-inflammatory medicine with some pain properties. Ketoralac, the generic name, is essentially a strong Ibuprofen (Advil) and comes in oral, nasal and injectable forms. It is not a narcotic painkiller and has the advantage of not clouding thinking as Vicodin or other similar narcotic drugs can. I doubt team doctors would have given a muscle relaxer either as that may have affected Romo’s entire body and made him lethargic.

When he was hit, Romo was wearing a back pad, which may have helped dissipate the forces. The pad may have saved him from a transverse process (non structural) fracture like the one Neymar suffered in the World Cup recently. My guess is that you will see an ever larger/thicker pad next week.

There is no question this was a painful injury, but fortunately there was no structural damage. Romo is likely to be more sore and stiff today as swelling sets in. Fans and media shouldn’t worry if he misses some time this week as practices may be in question. I would be surprised if Romo doesn’t play next week in a showdown against the Cardinals.