Ingram is vaccinated, according to the report, which means he can return after receiving two negative test results 24 hours apart.

It’s unlikely he would be cleared in time for Sunday’s game between the Saints (5-7) and host New York Jets (3-9). New Orleans is on a four-game losing streak.

The three-time Pro Bowl selection has accumulated 9,900 yards from scrimmage with 74 touchdowns in 144 career games with the Saints, Baltimore Ravens (2019-20) and Texans.

Detroit Lions quarterback Jared Goff called in sick Wednesday and is one of at least five players dealing with flu-like symptoms.

Speaking to reporters via Zoom from his home, Goff said that he’s already feeling better.

The Lions (1-10-1) won for the first time this season last Sunday behind a three-touchdown game from Goff to beat the Minnesota Vikings. The performance earned the 27-year-old NFC Offensive Player of the Week honors.

In two games since his return from an oblique injury, Goff has a completion percentage near 70 with 467 passing yards and five touchdowns.

The Lions visit the Denver Broncos (6-6) on Sunday.

Minnesota Vikings wide receiver Adam Thielen did not participate in Wednesday’s walk-through practice and was ruled out for Thursday’s game against the visiting Pittsburgh Steelers.

Running back Dalvin Cook, however, was deemed limited in practice for the second straight day with a shoulder injury. He is listed as questionable to face the Steelers (6-5-1) after sitting out Minnesota’s 29-27 loss to the Detroit Lions on Sunday.

Thielen sustained an injured right ankle while being tackled by Lions cornerback Jerry Jacobs early in the first quarter on Sunday.

Thielen, 31, has 64 receptions for 686 yards and 10 touchdowns in 12 games this season for the Vikings (5-7). The two-time Pro Bowl selection is in his eighth season with Minnesota.

Rookie offensive tackle Christian Darrisaw was ruled out for Thursday’s contest after failing to practice this week due to an ankle injury.

Alexander, 24, landed on IR on Oct. 9 after injuring the AC joint in his right shoulder in the third quarter of Green Bay’s 27-17 victory over the Pittsburgh Steelers on Oct. 3.

A first-round pick in 2018, Alexander has 188 tackles and five interceptions in 48 career games (46 starts). He has 13 tackles and one pick this season.

Coming off their bye week, the Packers (9-3) host the NFC North rival Chicago Bears (4-8) on Sunday night. Green Bay won the first meeting this season, 24-14, at Soldier Field in Week 6.

Joe Burrow has plans, provided the Cincinnati Bengals quarterback gets his dislocated right pinky to cooperate.

Burrow intends to take the practice field Wednesday and throw for the first time since he was hurt in Sunday’s loss to the Los Angeles Chargers.

“We’ll have to see. I’m going to try some things in practice this week to see what works best,” Burrow said of figuring out an effective pain management plan.

With five games left in the regular season — all against teams with at least a .500 record — the Bengals are a game behind the AFC North-leading Baltimore Ravens. Cincinnati has games remaining with Baltimore, Denver, Kansas City and Cleveland after hosting the 49ers.

Burrow, who turns 25 on Friday, said “at least a little bit” of practice Wednesday is the goal, with the idea of graduating from there.

He said he “doesn’t foresee” a scenario in which he misses Sunday’s game.

Head coach Matt Nagy said Wednesday that the Bears have no physical limitations on Fields.

Fields has been sidelined with rib fractures sustained in the Bears’ 16-13 loss to the Baltimore Ravens on Nov. 21.

Andy Dalton started the last two games for the Bears (4-8), who have dropped five of their last six contests heading into Sunday’s road game versus the Packers (9-3).

Fields, 22, has thrown for 1,361 yards with four touchdowns and eight interceptions in 10 games (eight starts) this season since being selected with the 11th overall pick of the 2021 NFL Draft. He also has rushed for 311 yards and two scores.

Pike, who played both defensive end and linebacker, competed in 173 career games (one start) with the Bills. He recorded 41 tackles, one sack and one fumble recovery since being selected by Buffalo in the seventh round of the 1986 NFL Draft.

“He was a big man who played special teams which was a matchup nightmare for our opponents,” former teammate Steve Tasker said. “He was a unique specimen. His ability to run and play special teams with his versatility was unbelievable.”

Pike recently attended the Bills’ home game against the Houston Texans on Oct. 3. He served as the club’s Crucial Catch honoree, which is the NFL’s program to fight cancer through early detection and risk reduction.

Pike is survived by his wife, Sharon, their two sons, Ezekiel and Malachi, and their daughter, Kramer. 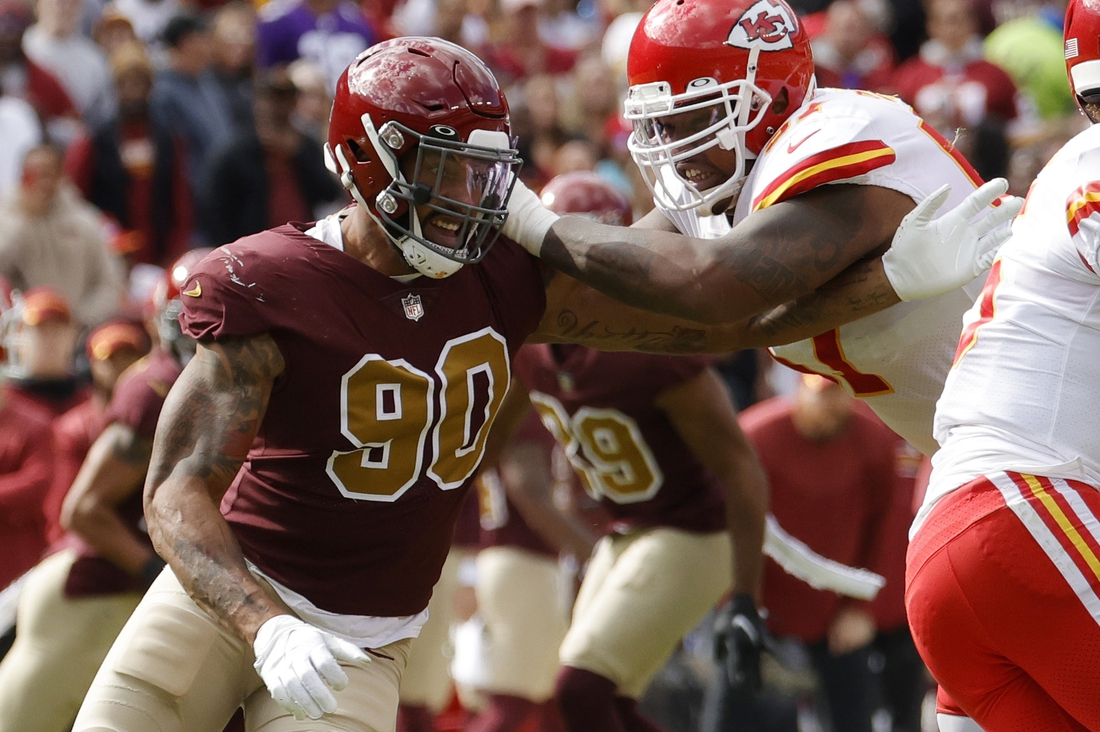 Sweat was expected to return to practice on Wednesday after missing the last four games with a fractured jaw.

He is expected to be sidelined the next 10 days because he is unvaccinated, per multiple reports. That timeline would keep him out of Washington’s home game against the Dallas Cowboys on Sunday and likely a road contest versus the Philadelphia Eagles on Dec. 19. He could conceivably play against the Eagles, but would be unable to practice during the week.

Thomas sustained a knee injury following a hit from Las Vegas Raiders pass rusher Yannick Ngakoue on Sunday. The move to injured reserve is the second in 2021 for Thomas, thus ending his season.

Thomas returned from a six-game absence on Thanksgiving weekend. He caught a touchdown pass on the opening drive in Las Vegas on Sunday and finished with three catches for 48 yards in Washington’s 17-15 victory.

Thomas, 30, was hurt five minutes into the fourth quarter when Ngakoue lunged at him from Thomas’ left side and hit him at the knees.

Ricky Seals-Jones played in the No. 1 tight end role when Thomas exited on Sunday.

Running back Jonathan Williams was signed off the practice squad Wednesday to fill Thomas’ spot on the roster. 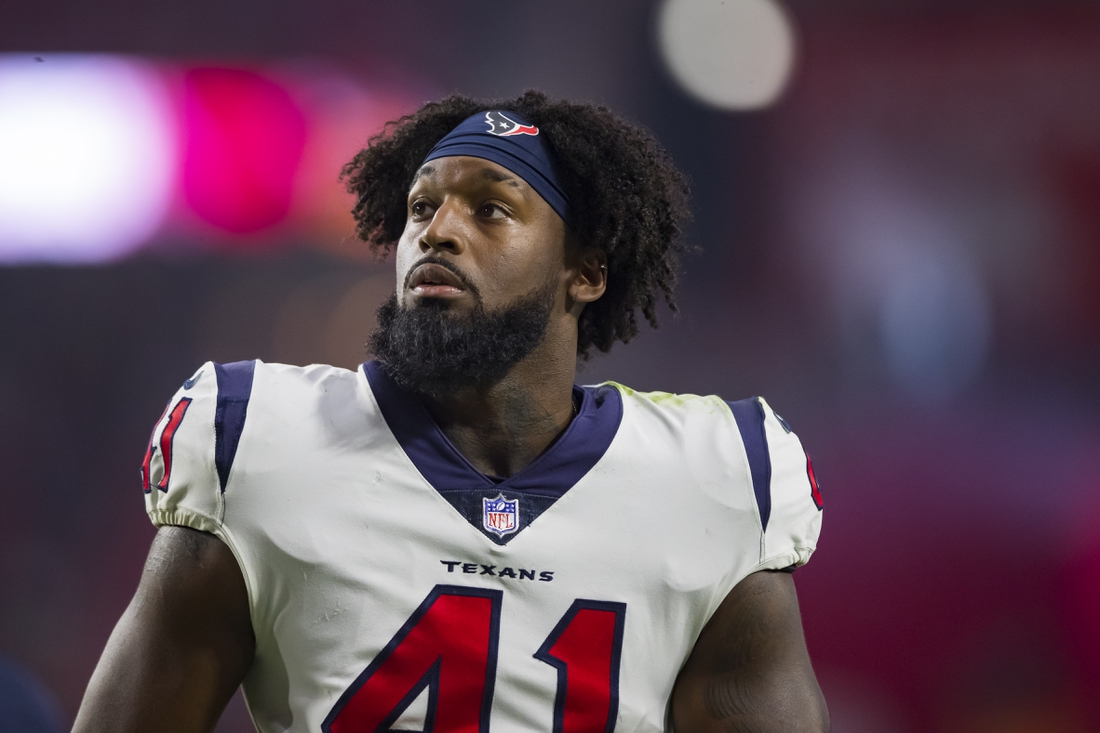 The 2020 NFL tackles leader, who signed a four-year, $58 million extension in August 2020, will be placed on waivers.

The fifth-year starter has been disciplined at least twice this season for violating team rules, including a suspension for last Sunday’s 31-0 loss to the Indianapolis Colts. According to the Houston Chronicle, the punishment was for missing a COVID-19 test.

Cunningham, 27, has 67 tackles and one forced fumble in 10 games (seven starts) this season.

Tampa Bay Buccaneers cornerback Richard Sherman has been designated to return from injured reserve on Wednesday.

Also on Wednesday, Buccaneers wide receiver Justin Watson was designated to return from the physically unable to perform list.

The designations open a 21-day window to practice for both players to be activated to the 53-man roster.

Buccaneers head coach Bruce Arians said on Monday that Sherman would begin crosstraining at safety upon his return to practice.

Sherman sustained a calf injury while warming up for a game against the Washington Football Team on Nov. 14. He was set to make his fourth start since joining the team in late September.

The 33-year-old Stanford product has appeared in 142 career games (136 starts) in 10-plus seasons with the Seattle Seahawks, San Francisco 49ers and Buccaneers. He has 36 interceptions, five forced fumbles and seven fumble recoveries.

Watson, 25, has been sidelined the entire season by a knee injury. He has 23 receptions for 258 yards and two touchdowns in 39 career games with the Buccaneers.