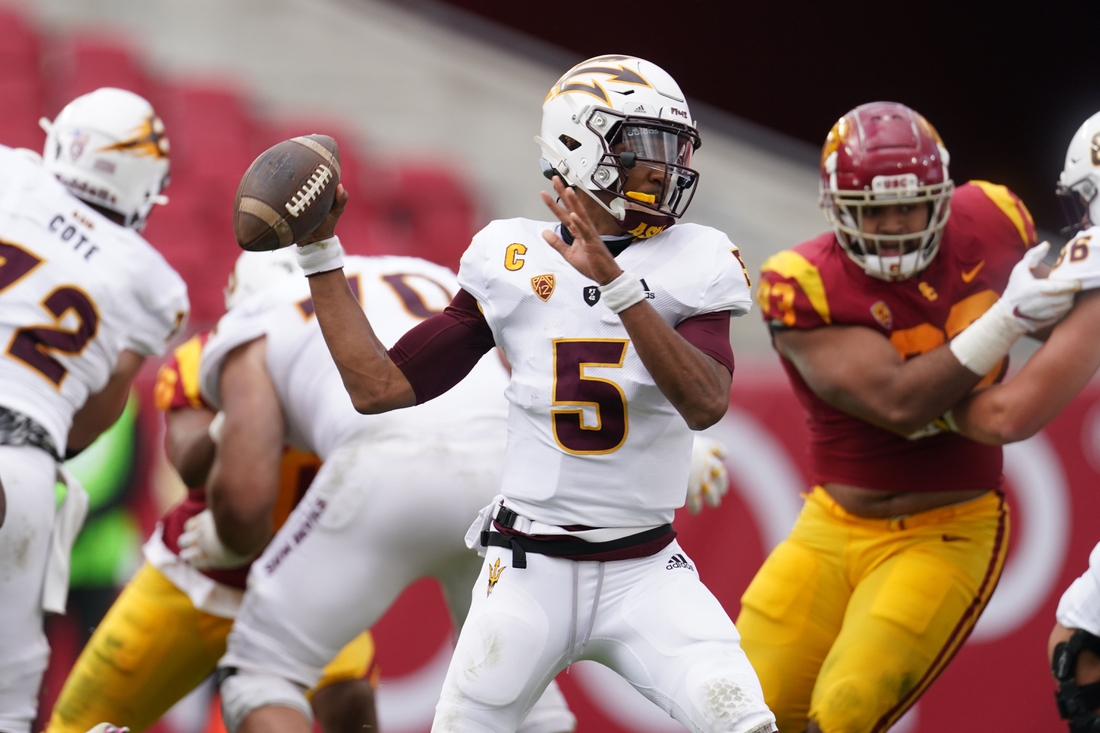 After delay to belated season, Cal ready to play at Arizona State

Two teams coming off disappointing opening weeks — one on the field, the other off — go head-to-head on Saturday night when Arizona State hosts California in Pac-12 Conference football.

Arizona State (0-1, 0-1 Pac-12) was three minutes away from a win at 20th-ranked Southern California in its belated 2020 debut last Saturday before two late Trojans touchdowns sandwiching a successful onside kick sent the Sun Devils home with a 28-27 defeat.

Cal, meanwhile, never had a chance to play its scheduled opener against Washington. The Pac-12 canceled the game because a positive COVID-19 test on the Golden Bears’ roster and resulting contact tracing impacted a significant percentage of the team.

After disclosing that a defensive lineman had tested positive last week, prompting the game’s cancellation, Cal hoped to get a green light from Berkeley (Calif.) Public Health officials as early as Monday to be ready to meet the Sun Devils. But by end of day Tuesday, the Bears still hadn’t received such clearance.

“If they tell us there’s a chance we can play, we’re going to practice,” Cal coach Justin Wilcox said as he awaited word. “The only way to look at it is to be optimistic. Until they tell us otherwise, that’s what we’re doing.”

If the game goes on as scheduled, the Bears will see a team that has the advantage of playing once. But at the same time, the Sun Devils were hurting a bit both mentally and physically in the aftermath of the narrow defeat in Los Angeles.

“We’re back in the mode of trying to regroup; it started with the players,” Arizona State coach Herm Edwards said. “You can imagine how they felt, along with the coaching staff, but we have to put that behind us now and move forward. A lot of learning moments and teaching moments that we can use for an opportunity to get better.”

The most significant injury the Sun Devils sustained in the game was bruised ribs that knocked top returning wideout Frank Darby out of the final three quarters. Darby was the Arizona State’s second-leading receiver last season behind Brandon Aiyuk, who has moved on to the NFL.

“I’m hoping Frank will be available to play (against Cal),” Edwards said Tuesday. “I do think he will be.”

Daniels ranked fifth in the conference with 245.3 passing yards per game last season, but he did most of his damage on the ground in the loss at USC. He rushed for 111 yards, the fourth-highest total among all Pac-12 players last week.

Garbers sprained his right shoulder in that September game, an injury that kept him out of the Bears’ next four contests. He returned to lead Cal to a 3-1 finish, including a Redbox Bowl win over Illinois, contributing four TD passes and his third rushing score of the season to a 35-20 victory.

Garbers will make his 2020 debut against an Arizona State defense led by reigning Pac-12 Defensive Player of the Week Merlin Robertson. The junior linebacker had 10 tackles, an interception and a fumble recovery at USC.

Defense has taken a day off in a majority of recent games between the Sun Devils and Bears. Two of the past three matchups have ended in a 51-41 Arizona State win and a 48-46 Cal victory, and the winning team has put up 47 or more points in four of the past six meetings.

Arizona State prevailed in the past two meetings.