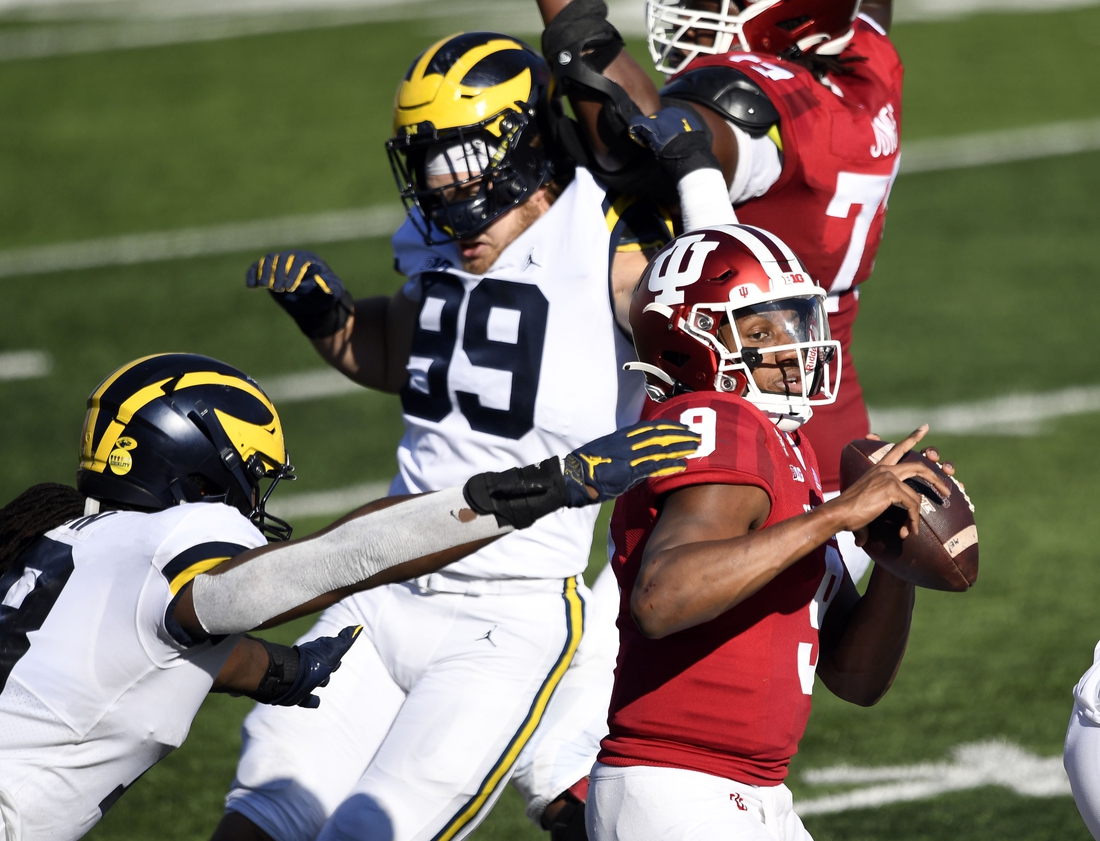 Hoosiers try to live up to No. 10 ranking, face MSU

For 10th-ranked Indiana, the season has been about breaking down barriers and preconceived notions of its football program.

The Hoosiers (3-0 overall) will get another chance to show how far they have progressed when they visit Michigan State in a Big Ten rivalry game Saturday.

Indiana this week cracked the Top 10 of The Associated Press football poll for the first time since 1969. At 3-0 in league play, Indiana is off to its best start in the Big Ten since 1988.

Next on the Hoosiers’ long list of goals is gaining the Old Brass Spittoon, a trophy they haven’t won since 2016. Indiana came close last season, falling 40-31 at Michigan State in a game that came down to the final minutes.

Fourth-year Indiana coach Tom Allen called it “a trophy game for us here that we have placed a high value on … and have not been able to obtain that trophy since I have been the head coach here. And so, (we’re) just really excited about our opportunity to play a very tough, hard-nosed, hard-playing football team that we know is going to be playing their best football.”

Indiana has raced to a perfect start behind a defense that has forced eight takeaways, plus a balanced offense led by sophomore quarterback Michael Penix Jr. and running back Stevie Scott III. Penix passed for a career-high 342 yards and three touchdowns in Indiana’s 38-21 win over Michigan last week, while Scott rushed for a season-high 97 yards and two TDs.

“We have been having a great season so far, but the season is not over,” Penix said. “We still have games that we are looking forward to, like Michigan State this weekend. This is a great program, so we have to come with a positive mind set.”

Penix is 8-1 as a starting quarterback, with his loss coming at Michigan State last season.

“As the starting quarterback, when there is a big win, you are the one that is getting a lot of the recognition,” Penix said. “For me, the main role I have is showing the team that we cannot be complacent.”

Michigan State (1-2, 1-2 Big Ten) has won three straight against Indiana and 10 of their past 11 meetings. The Spartans are looking to bounce back from last week’s 49-7 loss at Iowa. Spartans starting quarterback Rocky Lombardi was intercepted three times in that game.

“We’ve got a lot of work to do at quarterback, at every position,” Michigan State coach Mel Tucker said.

In his first season at Michigan State, Tucker is still trying to build a cohesive team after losing 15 starters from last season. Junior receiver Jalen Nailor has provided a spark with 12 catches for 271 yards and a TD. But the Spartans have been unable to get their ground game going, averaging a league-worst 78.3 yards a game.

Tucker added a segment during Michigan State’s practice on Monday to address fundamentals.

“You cannot scheme your way out of a game if you don’t play with fundamentals and physical and mental toughness,” he said.