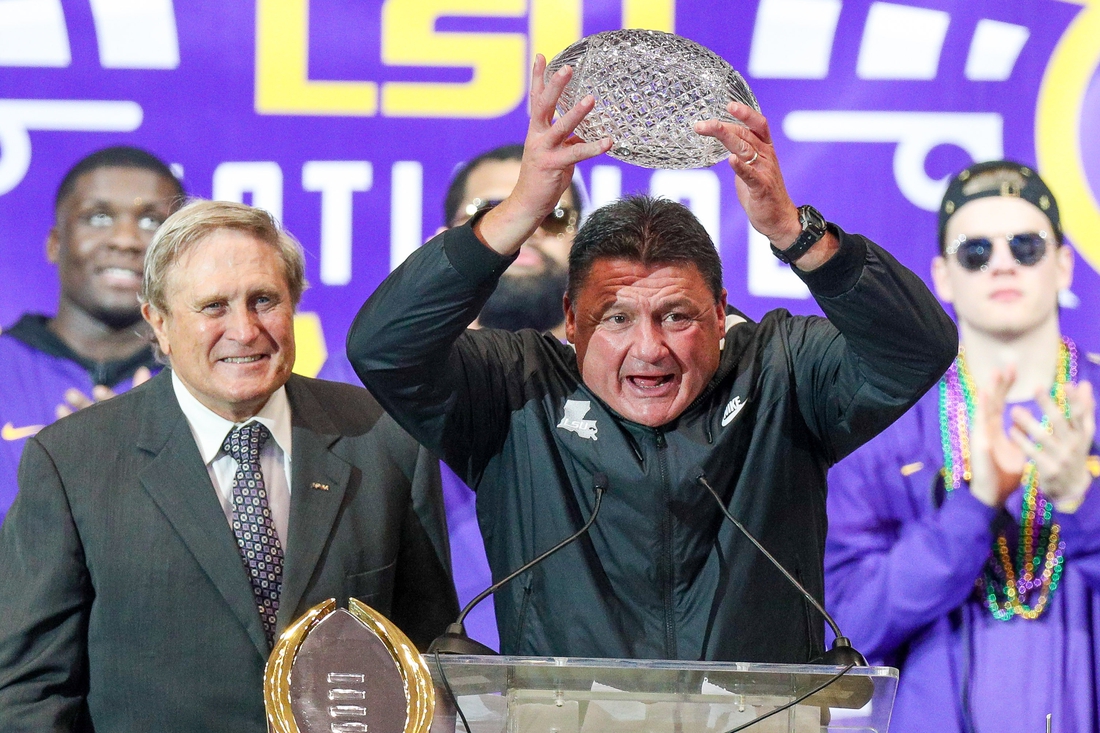 Defending national champion LSU will kick off the season at home against Mississippi State and new coach Mike Leach on Sept. 26.

The SEC revealed its 10-game, league-only schedule on Monday.

The Tigers are ranked No. 5 in the preseason coaches poll and coming off a 15-0 season. Leach was hired in January to coach the Bulldogs after eight seasons at Washington State (2012-19) and 10 seasons at Texas Tech (2000-09).

LSU will square off with No. 3 Alabama on Nov. 14 in Baton Rouge, La. The Tigers wrap up with a Dec. 5 home game vs. Mississippi — LSU’s first December home game since 2001.

Three other first-year SEC coaches also face daunting debut challenges. Eli Drinkwitz and Missouri will host Alabama, while Arkansas and Sam Pittman host No. 4 Georgia. Lane Kiffin and Ole Miss will have a home game against No. 8 Florida.

The other openers pit Kentucky at No. 11 Auburn, Tennessee at South Carolina and Vanderbilt at No. 13 Texas A&M.

Among the other highlights of the conference schedule is a rare visit from Georgia to Alabama on Oct. 17, the first time the Bulldogs will play in Tuscaloosa since 2007. Georgia won that contest 26-23 in overtime. The sides have met five times since, all Crimson Tide wins: regular-season victories in Athens, Ga., in 2008 and 2015; SEC championship game wins at Atlanta in 2012 and 2018; and a national-semifinal victory at Atlanta in January 2018.

The annual Georgia-Florida showdown will still be played in Jacksonville, Fla., but the date was moved from Oct. 31 to Nov. 7. The teams usual meet between Oct. 27 and Nov. 2, with the Nov. 7 date representing their latest date since a Nov. 9, 1991, matchup. The Bulldogs have beaten the Gators the past three years, immediately following a three-game Florida winning streak in the series.

The 11-week SEC schedule has every team with a bye on either Oct. 24, Oct. 31 or Nov. 7. The regular season concludes Dec. 5, and the SEC championship game was pushed back a week to Dec. 19 in Atlanta.

No. 21 Minnesota to rely on veteran leader vs. No. 18 Michigan