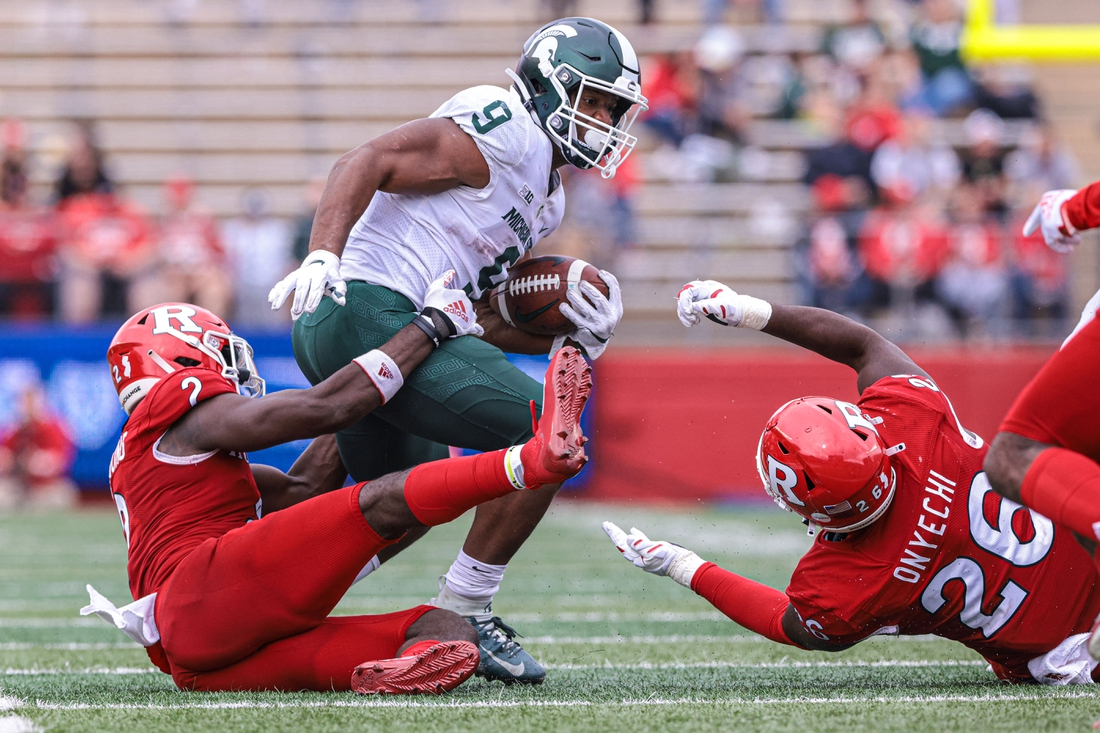 No. 10 Spartans look to continue meteoric rise at Indiana

Michigan State has been one of the biggest surprises in the Big Ten season.

Picked to finish as low as last in the Big Ten East in some national publications, the Spartans are undefeated through six games and this week vaulted to No. 10 in the AP Top 25.

But second year Michigan State coach Mel Tucker doesn’t think the Spartans have arrived yet. He is pushing for more consistency when Michigan State plays Indiana Saturday at Bloomington, Ind.

“We have so many areas where we need improvement in all three phases, individually and collectively,” he said. “It never stops. You’re never there, you never arrive. If you turn on the tape of the games, you don’t have to be a rocket scientist to see what areas we need to improve.

It’s the first top 10 ranking for the Spartans since Sept. 18, 2016, when they were No. 8 in both polls, but promptly tumbled into a seven-game losing streak.

Michigan State (6-0, 3-0 Big Ten) is coming off a 31-13 win at Rutgers. The offense has been sparked throughout the season by freshman running back Kenneth Walker III, who leads the nation in rushing with 913 yards and 9 TDs. Peyton Thorne has provided stability at the quarterback position, passing for 1,575 yards with 14 TDs to 2 interceptions.

Although Michigan State has beaten Indiana in 10 of the past 12 meetings, the Spartans will be looking to avenge a 24-0 home loss last season when the surprising Hoosiers were the No. 10 team in the country.

“They’re all a big game, especially a rivalry game for a trophy,” Tucker said. “We’re playing for the (Old) Brass Spittoon.”

Indiana (2-3, 0-2 Big Ten) is looking to build some momentum after a disappointing start to conference play. The Hoosiers have yet to score a touchdown in two Big Ten games, and likely will be without starting quarterback Michael Penix Jr., who suffered a separated AC joint in his throwing shoulder during Indiana’s 24-0 loss at Penn State on Oct. 2.

If Penix can’t go, Indiana will turn to backup quarterback Jack Tuttle, who went 1-1 as a starter last season and has passed for 564 yards and 3 TDs in three seasons at Indiana.

“He’s started for us against one Big Ten team on the road, which was huge last year and has played many minutes beyond that,” Indiana coach Tom Allen said.

Indiana’s three losses so far this season have already eclipsed its loss total from last year’s 6-2 breakout campaign. But the Hoosiers are hoping a bye week will offer a fresh start and fresh perspective that will carry through the rest of the season.