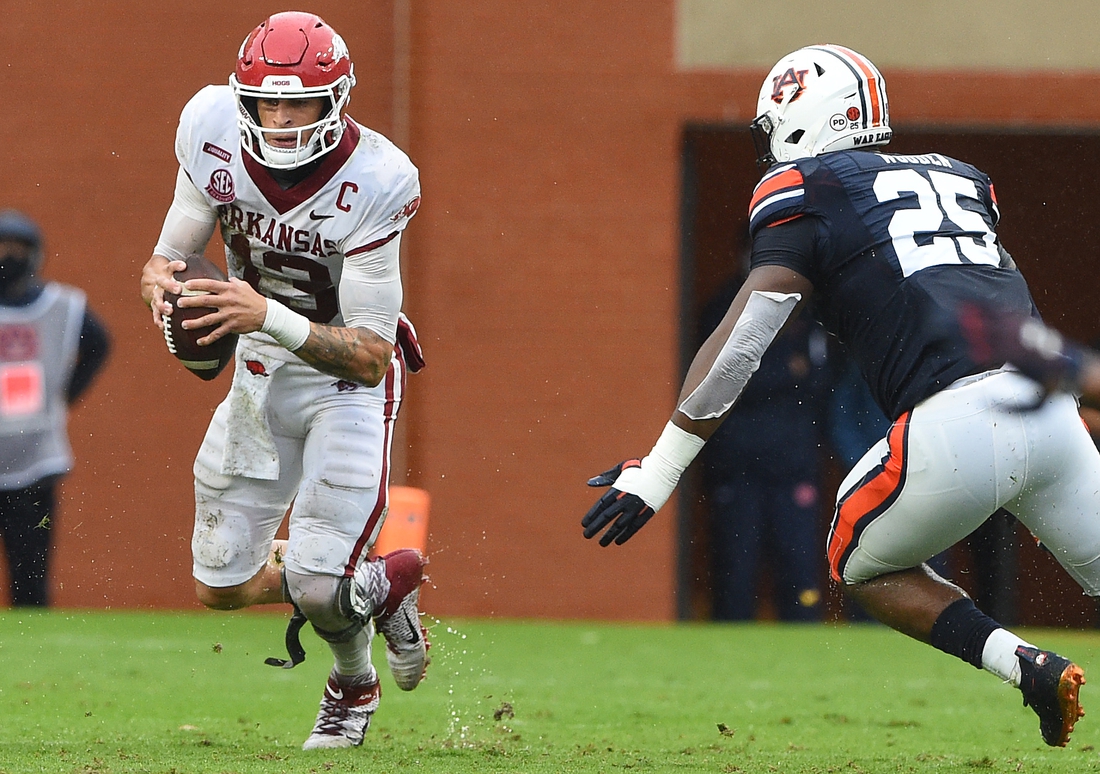 Tigers quarterback Bo Nix passed for 187 yards and a touchdown and also scored a rushing touchdown. Freshman Tank Bigsby rushed for 146 yards while Anthony Schwartz caught 10 passes for 100 yards and one touchdown for Auburn (2-1).

Trailing by eight at halftime, the Razorbacks drove 85 yards to cut Auburn’s lead to 20-18 with 4:14 left in the third quarter. Franks connected with Trelon Smith on a 5-yard toss for the touchdown. A two-point try failed.

Schwartz hauled in a 17-yard scoring pass from Nix in the opening seconds of the fourth quarter to give the Tigers a 27-18 advantage.

Warren caught a 30-yard touchdown pass from Franks with 5:29 left and the conversion kick gave Arkansas a 28-27 lead. On the previous play, Franks hit Mike Woods with an 11-yard pass on fouth-and-5 from the Auburn 41 to keep the drive alive.

Carlson missed a 34-yard field goal try on Auburn’s next possession but redeemed himself in the final seconds.

A special teams play gave Auburn the lead with 4:32 remaining in the first quarter. Jordyn Peters blocked a George Caratan punt attempt from the Arkansas end zone and Peters fell on the ball for a touchdown.

Nix picked up the last 15 yards with a scoring run on an 80-yard drive for a 17-point Tigers lead.

Arkansas got on the board with Franks’ 4-yard touchdown pass to Woods, finishing off a 65-yard drive. The point after try was missed.

Following a Tigers punt, Franks found Warren on a wide receiver screen from seven yards out with 2:15 left in the half. A two-point pass attempt went incomplete.

Carlson made a 25-yard field goal in the final minute of the half.

No. 25 Coastal Carolina debuts in Top 25 vs. Georgia Southern