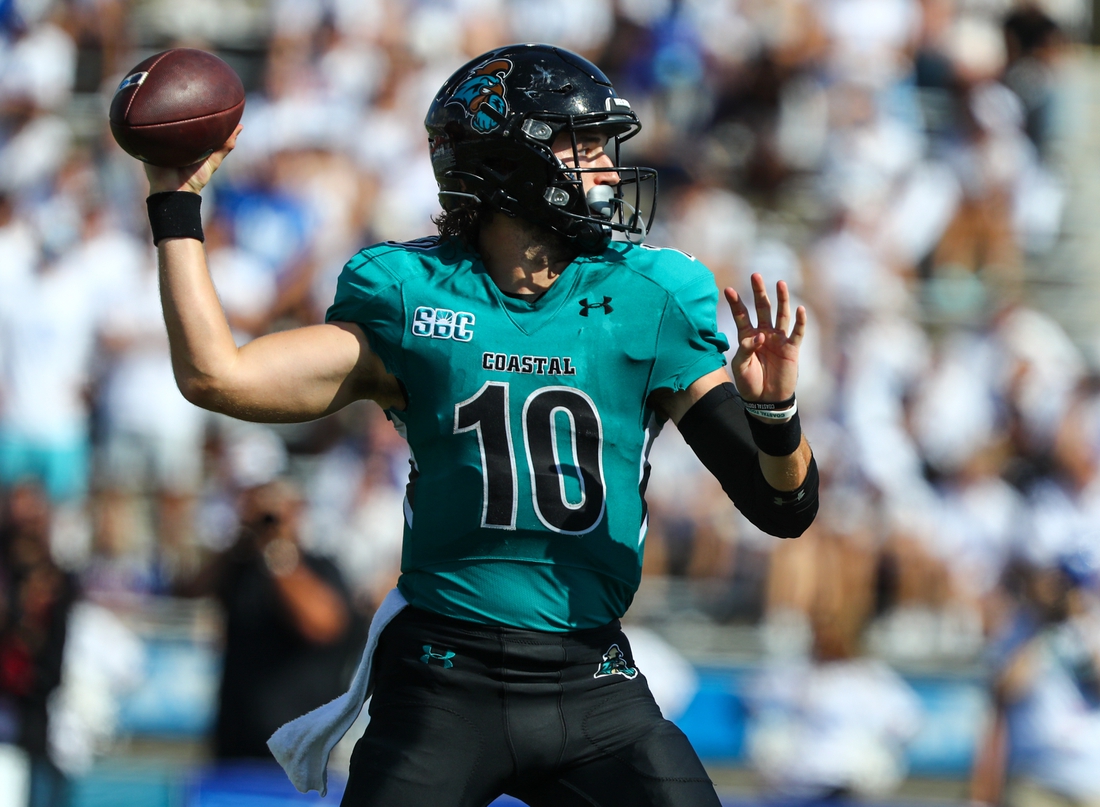 This sounds like it could be an ideal situation for No. 15 Coastal Carolina.

The plan for Thursday night’s game at Arkansas State is for the Chanticleers to emphasize the areas that normally suit them best.

“When you play a short-week game, you’ve obviously got to rely on what you do well,” Coastal Carolina coach Jamey Chadwell said. “You’re not going to do too much.”

The matchup in Jonesboro, Ark., marks the first Sun Belt Conference road game for the Chanticleers.

No. 15 Coastal Carolina (5-0, 1-0 Sun Belt) hasn’t allowed a touchdown in its past two games, demolishing Massachusetts and Louisiana Monroe by a combined score of 112-9 in a pair of home games.

“We know we’re going to be playing better and better teams going forward,” Chadwell said. “Our defense, as good as they can be, I think they can get better. If we’re to be really good in this league, they’re going to be the ones to help us do it.”

Despite that dominance, the Coastal Carolina defense didn’t collect a turnover until the fourth quarter of the fifth game.

Arkansas State (1-4, 0-1) has an array of issues to address following a four-game losing streak. The Red Wolves tumbled by 59-33 on Saturday at Georgia Southern, giving up more than 50 points for the third time this season.

Red Wolves coach Butch Jones, whose squad lost Memphis, Washington and Tulsa prior to Sun Belt Conference competition, said he knows the team’s top-heavy schedule means there has to be rapid development.

Arkansas State quarterback James Blackman has thrown for multiple touchdowns in three games this year. He’s in his first season with the Red Wolves after transferring from Florida State.

Coastal Carolina, which has reached the 50-point mark in three of its games, is 5-0 for the second year in a row and for the fifth time in nine seasons.

The Chanticleers have had their lone close call in their only road outing, edging Buffalo 28-25 on Sept. 18 in a non-conference matchup.

Coastal Carolina quarterback Grayson McCall has completed his last 15 passes, including a 13-for-13 mark against UL-Monroe. He didn’t play in the second half Saturday, in part because he suffered what Chadwell described as a slight ankle injury.

“He could have gone back in and played,” Chadwell said. “Since it’s a Thursday (for the next game), quicker turnaround, we wanted to take that extra precaution.”

Either way, the Chanticleers were determined to use a bunch of backups in the second half with the quick turnaround on the schedule.

“It helps your morale,” Chadwell said. “We’re getting a lot of people in and they’re getting to contribute.”

Despite the success through the air, the Chanticleers might want to see what’s available in terms of a ground attack. Arkansas State gave up 503 rushing yards to Georgia Southern.

Coastal Carolina could have kicker Massimo Biscardi back in action after he has missed three games with an injury.

This begins a three-game stretch of midweek games for the Chanticleers, who won’t play again on a Saturday until November.

Until last year’s 52-23 romp at home, Coastal Carolina had never defeated Arkansas State in three previous meetings. That included a one-point loss in 2019 in Jonesboro.