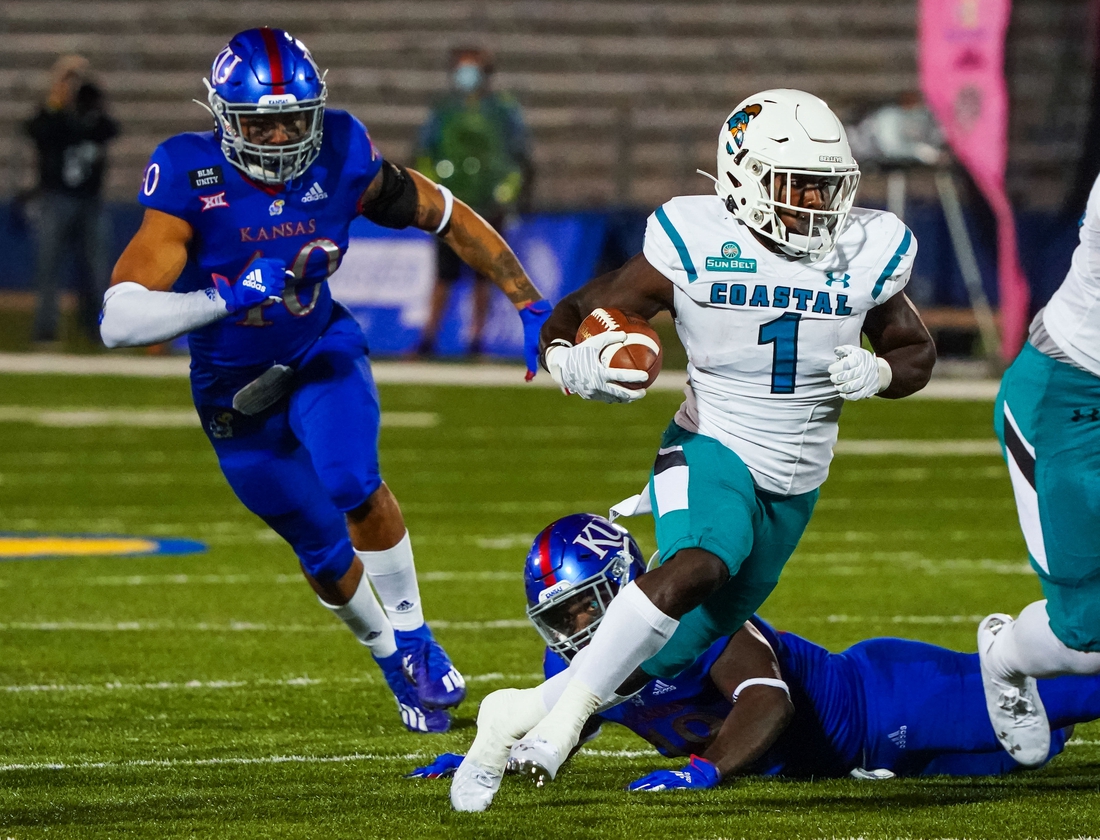 No. 15 Coastal Carolina looks to keep rolling vs. South Alabama

Maybe No. 15 Coastal Carolina is becoming comfortable with its lofty status.

The Chanticleers have clicked several boxes the past few weeks and the outlook appears brighter than ever.

Coastal Carolina (6-0, 4-0 Sun Belt) holds the highest national ranking in the history of the conference going into Saturday night’s homecoming contest against South Alabama (3-3, 2-1) at Brooks Stadium in Conway, S.C.

The Chanticleers have excelled in many areas.

“I’m really excited about this national attention,” running back Reese White said. “I’m just happy to show I can play on a Top 20 team.”

South Alabama has goals as well.

“The great thing for us is we still control our own destiny,” Jaguars coach Steve Campbell said. “We’ll have another good opportunity this weekend against an outstanding Coastal Carolina team.”

Coastal Carolina is coming off a 51-0 whipping of host Georgia State, recording the first shutout in the Football Bowl Subdivision history of the program — and first blanking in any classification since November 2015. It also gave the Chanticleers their sixth victory — the most since the move to the FBS level in 2017.

The potential for a special season keeps growing for the Chanticleers, who are playing their third game as a ranked team.

Quarterback Grayson McCall missed the team’s previous home game because of an injury. He returned to action in fine form, racking up four touchdown passes and a rushing touchdown in the Georgia State game.

McCall, a redshirt freshman, has two or more touchdown passes in every game he has played this season. He has been the league’s Offensive Player of the Week twice.

“We have to find a way to contain him,” South Alabama defensive coordinator Greg Stewart said of McCall. “We need a very good red-zone plan. If they are not the best in the country, they are one of the top five when it comes to scoring touchdowns in the red zone.”

The Chanticleers, who have won their last five Sun Belt games dating to last season, also have showcased a versatile rushing attack. Joining White and CJ Marable is junior Shermari Jones, a transfer from Independence Community College in Kansas.

“Shermari’s addition takes a lot of pressure off of me and CJ,” White said. “Shermari is kind of new to the offense and he’s learning more.”

Through six games, the three running backs all have multiple touchdown runs and McCall has scored four rushing touchdowns.

South Alabama, which will play in Conway for the first time, had a little extra preparation time after a 24-17 road loss Oct. 29 at Georgia Southern. This will be the middle game of a three-game stretch of road outings for the Jaguars, who went 2-1 in October.

Jaguars linebacker Christian Bell said: “Yes, we are going against the 15th-ranked team in the country, but just because they are a ranked team does not mean we are going to look at them differently. We are going to work hard this week and handle business on Saturday.”

Coastal Carolina and South Alabama didn’t meet in the 2019 season.

“We’ve been able to watch them throughout the course of the season this year as we’ve prepared for other league opponents,” Campbell said. “Their quarterback is playing really well and they are utilizing (Marable) really well. He does a good job of getting vertical on wheel routes out of the backfield. They’ve done a good job of getting him in space down the field.”