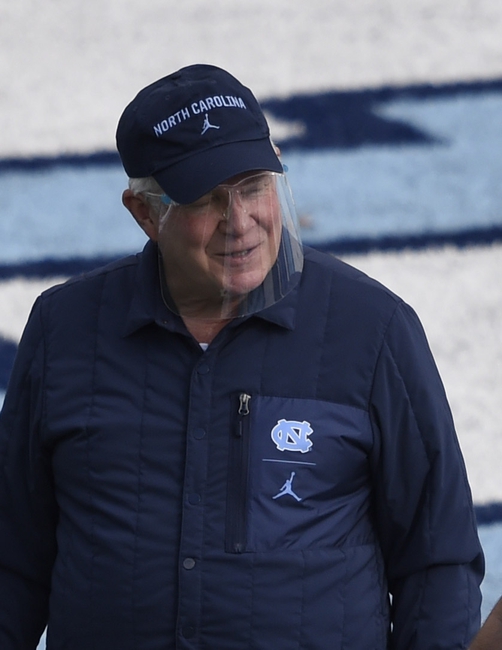 Michael Carter and Javonte Williams combined for 544 rushing yards and five touchdowns Saturday, as the 17th-ranked North Carolina Tar Heels beat 10th-ranked Miami every which way, amounting to a 62-26 victory over the host and 10th-ranked Hurricanes in an ACC game.

It was the most combined rushing yards by two teammates in FBS history. In addition, both running backs went over 1,000 yards for the season, and Williams broke the school record for single-season TDs (22).

Miami (8-2, 7-2) was embarrassed at home as its defense gave up seven scores in a row until Grayson Atkins missed a 37-yard field goal in the third quarter. That was Miami’s only “stop” of the game as UNC did not punt and did not turn the ball over.

Emblematic of Miami’s mishaps was a carry by Cam’Ron Harris during which he was hit by wide receiver Dee Wiggins, his teammate, who was running in motion down the line of scrimmage on the play.

Hurricanes quarterback D’Eriq King passed for 239 yards and two TDs. He also ran for 53 yards, but it wasn’t nearly enough.

On UNC’s second possession, Howell threw an apparent interception to DJ Ivey. But that pick was nullified by a penalty when Miami was flagged for having too many men on field. That led to Williams’ one-yard run.

Then, after Miami’s Donald Chaney was stopped for no gain on fourth-and-one, the next play was a 65-yard run by Carter. That made the score 21-3, and the rout was on.

By halftime, it was a blowout, with UNC on top, 34-10. UNC’s big plays in the second quarter included Carter’s 25-yard TD run and Howell’s 87-yard pass to Brown, which led to Atkins’ second field goal of the first half.

Miami ended a 34-0 UNC run by getting King’s two-yard TD pass to Mike Harley with 10 seconds left in the first half.

Miami got just one point closer in the third quarter on King’s 76-yard TD pass to Brevin Jordan and a two-point conversion toss to Wiggins, cutting UNC’s lead to 41-18.

But, on the second play of the fourth quarter, UNC answered with a double-reverse, 1-yard pass from Rontavius Groves to Howell to put the game away.
–Field Level Media