The NCAA remains unenthused about the expanding legalization of sports betting in the U.S., but nevertheless has no choice but to respond. One response was the creation of a team of experts to “explore how best to protect game integrity, monitor betting activity, manage sports data and expand educational efforts.”

Another idea is to begin mandated injury reporting. Commissioners and athletic directors from the SEC, Big 10 and Big 12 so far have indicated that things are trending in that direction. ACC commissioner John Swofford views it as critically important and expects its implementation next year. Big 12 commissioner Bob Bowlsby and SEC commissioner Greg Sankey addressed specific issues in connection with injury reporting, such as, who’s in charge, what information must be disclosed, and whether there legal limits to what information teams and conferences may indicate on reports (HIPAA has come up frequently). Even Michigan head coach Jim Harbaugh, known for injury information gamesmanship, is on board. “If we want to do an injury report,” Harbaugh said, “we can do an injury report.”

In light of what appears to be inevitability in the coming year or three, let’s take a look at what impact a new injury reporting requirement might have for teams, coaches, sportsbooks, sports bettors, media members and others.

“I think that is critically important and would not only include injuries but if there is disciplinary action where a player is suspended for a game for whatever reason, that would need to be a part of it as well,” ACC Commissioner Swofford said last week. “I think that reduces to some degree people you don’t really want coming around players and managers and doctors and anybody associated with the program, or coaches, and trying to get information in an underhanded kind of way.

And speaking of people you don’t want around players, yesterday we learned about Devante’ Zachery, aka “Tay Bang,” an individual who has wagered on the Florida Gators and was involved in some sort of confrontation with Gators football players in May. None of the players discussed in the First Coast News report were charged with any crime, nor is it clear if the incident involving Tay Bang had anything to do with gambling.

In any case, there ought to be fewer Tay Bangs lurking around if there is no information to be gained on the Gainesville campus or elsewhere.

2. Stop the potential trade, sale or abuse of inside information.

This is an extension of the first point. There’s a lot of statisticians, trainers, video guys, coordinators and others with access to potentially key injury information that’s not currently disclosed. Middle linebacker and stud defensive tackle nursing knee injuries against a team that cut blocks a lot?

Don’t think it has happened or could? We don’t know if this betrayal was gambling-related, but a Wake Forest investigation in 2016 revealed that radio announcer Tommy Elrod was fired for “providing or attempted to provide confidential and proprietary game preparation” to opposing teams on multiple occasions. Head coach Dave Clawson said, “We allowed him to have full access to our players, team functions, film room, and practices.”

3. Some legal wrangling and uncertainty.

The Health Insurance Portability and Accountability Act of 1996 (HIPAA) required the federal government to develop regulations protecting the privacy and security of certain health information.

This protection may or may not apply to injury disclosures involving student-athletes. HIPAA excludes employers because employers are not a “covered entity.” Student athletes are not employees (a whole separate battle).

“Covered entities” are defined in the HIPAA rules as (1) health plans, (2) health care clearinghouses, and (3) health care providers who electronically transmit certain health information. Per the NIH, “Many organizations that use, collect, access, and disclose individually identifiable health information will not be covered entities, and thus, will not have to comply with the Privacy Rule.”

But there is not certainty in the college ranks about how the law may apply — and it may not.

“If there’s something the young man and his family wants to release, that’s up to him.” said Stanford coach David Shaw. “It’s his health. But as far as institutionally talking about a young person’s health, we have HIPAA laws that prohibit that.”

A simplified system noting solely a player’s status as “out” or “doubtful” with no mention of the injury might cure any potential issue, but that’s a half-measure.  This is one for the health lawyers to explore.

4. Some resistance, gamesmanship, and probable penalties. 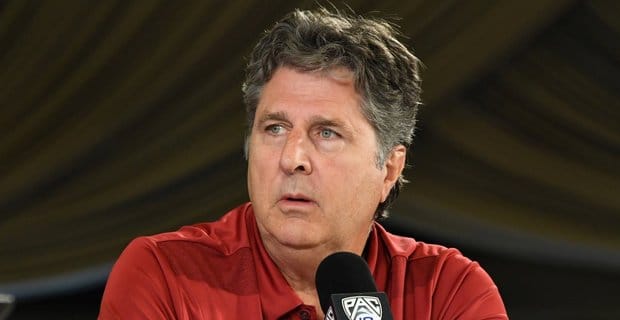 It may just be bluster, but Washington Cougars head football coach Mike Leach said this week he won’t disclose injuries unless forced, and doubts the NCAA will mandate it. “But they might, and if they do, then I’ll try to figure out a way around it.”

Northwestern coach Pat Fitzgerald expressed that as long as the policy is universally enforced, he’s cool with it.

“But if we move forward to where we have to have a fully transparent conference-wide or national one, I’d have no problem with that, as long as we adhere to it. There needs to be accountability. If there’s not accountability to it, then I’ll do whatever I have to do to protect our players, first and foremost, and protect our program second, in full disclosure of transparency.”

There will be a spectrum of coaching cooperation and the NCAA will have to make the boundaries clear.

5. Better and more certain oddsmaking by the sportsbooks.

“College injury reporting is a positive for the sports books and the players,” veteran oddsmaker Robert Walker of USBookmaking told Sports Handle. “The toughest position for a bookmaker is questionable, because depending on the position it literally could mean the difference between posting a line or not.”

Also consider the case of Toledo basketball from 2004 to 2006, which was sniffed out by former Las Vegas Sports Consultants owner Kenny White, who at the time was vice president of data integrity for Don Best. From Todd Dewey in the Las Vegas Review-Journal:

After some of White’s bigger clients at LVSC, an oddsmaking firm, complained in 2005 that his lines on the Mid-American Conference were terrible, he dedicated a person to study the league to sharpen the odds. But the books kept losing on MAC games.

“I went back the previous year or two and started to analyze every team in the league and pinpointed Toledo. That was the one team where the bettors were never wrong,” White said. “When they bet on them and the line moved with them, Toledo covered easily. When they bet against them, they had no shot to win.

“I reported it to the NCAA. I said, ‘I think there’s point shaving and game fixing going on with Toledo.’ They said, ‘That’s a pretty bold claim. We’ll get back to you.’”

“I almost fell off my stool,” White said. “The NCAA called me the next day and said, ‘You’re smarter than we are. You’re hired. We want you to monitor all our conferences.’”

This example isn’t exactly related to injuries or injury reporting, but illustrates the need for more information so bookmakers can hang a line that’s consistent with reality. This instance also buttresses the argument in favor of legal sports betting, period. There will be more eyeballs on everything and every conference. Further, this highlights the benefit of cooperation between leagues and operators. That relationship should not be adversarial, as some coaches seem to view it.

As an extension of the previous note, more and better information for the books means more games for the patrons to bet on. For one, bookmakers won’t have to back off the MAC.

“I’m not sure how it would impact betting limits as those are generally biased towards your customer base, but it surely won’t hurt,” Walker said.

Also, bettors won’t get blindsided by unknown injuries either, namely after backing a certain team and finding out a key player is sidelined.

Ohio State head coach Urban Meyer and Jim Harbaugh are known guard information about players’ health statuses. Can’t blame ‘em. They haven’t been required to disclose anything, so why would they help an opposing team game plan?

In a world with mandated injury reporting, coaches won’t get surprised on game day with schemes they haven’t seen on tape resulting from injury-forced personnel changes.

They’ll all have to disclose information but it’s a change that coaches most likely would welcome, and would help keep their blood pressure down a notch.

Access right now is on a school-by-school basis, with some practices wide open to media and others closed off. More uniform requirements, perhaps coming from the conference level, could level the playing field a bit. Of course there is the opportunity for teams to manipulate this by holding someone out during media time, but not the rest of practice.

As with everything here, we shall see, but the status of CFB injury reporting? Probable.