Also check out our NFL “Lookahead Lines” story, finding value (or not) by comparing earlier lines, and identifying recency bias.

Back to the college game (season record: 11-9) … This week we look at three live underdogs and a big favorite in the Big Ten. 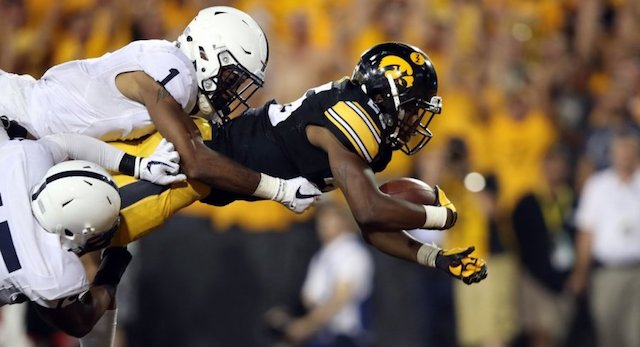 Penn State continues to be the most overvalued team in college football. After losing two straight, the Nittany Lions managed to squeak by a bad Indiana team last week, 33-28, as a 14-point favorite. Penn State won the game despite being outgained by 137 yards.

Iowa has won three consecutive games by a combined score of 113-47 and is coming off a 23-0 shutout over Maryland. The Hawkeyes have been money on the road in recent years, going 22-10-1 ATS in its last 33 games away from home.

It seems like people still aren’t buying into Iowa, but the Hawkeyes have outgained five opponents by at least 100 yards and their only blemish this season was a tough loss at Wisconsin. Penn State has failed to cover its last two games as favorites, while Iowa is 4-0 ATS in its last four road games dating back to last year.

The money came in on Penn State early with the line opening between 4.5-6 and up to 6.5 at most Las Vegas sportsbooks. I expect the money to come in the other way as we get closer to kickoff. Almost a touchdown is too much to give in what should be a close game throughout.

I’ll gladly take the Hawkeyes plus the points with a small wager on the Iowa ML +210. 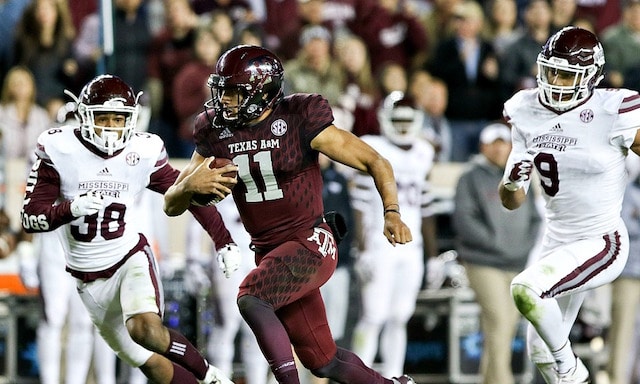 These two teams are going in opposite directions. Texas A&M has won three straight and is coming off a bye, while Mississippi State has lost three of four.

The Bulldogs were expected to be Alabama’s biggest threat in the SEC West, but have struggled on the offensive side of the ball. Mississippi State has scored seven points or fewer in its last three losses.

The Bulldogs aren’t likely to get the offense going this week. Texas A&M allows just 78 yards per game rushing and 3.1 yards per carry. The Aggies’ defense has held its last three opponents to a season-low in total yards. Mississippi State will need to throw the ball to win this game and that won’t be easy.

Quarterback Nick Fitzgerald is coming off a game versus LSU where he threw for 59 yards and four interceptions while completing just 33 percent of his passes. Fitzgerald has thrown for fewer than 100 yards in three straight games with no touchdowns and five interceptions.

The Aggies are 6-1 ATS this season and after starting 3-0. Mississippi State is 1-3 SU and ATS in its last four games. I’ll call for the small road upset here. Keep in mind the line opened at 3 and has come down to 1.

[Located in New Jersey and want to join a quality legal sportsbook with a generous sign up bonus? Read our review of SugarHouse Sportsbook here. Sign up using our link and you’ll get a 100% match bonus on up to $250 on your first deposit (with only a 1x wager requirement).  Use code HANDLE when depositing.

[You can download the app for Android phones here and iOS devices here. Prefer the laptop/desktop experience? The web-based platform is accessible here.]

I took Kentucky last week as a 14-point favorite over Vanderbilt. They won, 14-7, failing to cover in one of the ugliest games you’ll ever see. I’m going back to the Wildcats getting a touchdown on the road to Missouri this week.

The Tigers hammered Memphis last Saturday, 65-33, as a nine-point favorite. Memphis is a perfect opponent for Missouri because it has one of the worst defenses in the country. The Tigers face a much tougher test this week against Kentucky. The Wildcats rank 11th in total defense, holding opponents to 108 yards below their season average.

Kentucky is also 14th in pass efficiency defense and its defensive front should create problems for Missouri quarterback Drew Lock. Lock’s numbers are great against weaker competition, but he has a TD to interception ratio of 21-28 versus Power 5 bowl opponents.

Missouri has played four Power 5 teams this year, beating Purdue by three, losing to Georgia by 14, losing to South Carolina by three and losing to Alabama by 29. A touchdown is too much here with an overvalued Missouri team. Kentucky has won three straight in this series. Make it four.

This is the first meeting between the two schools and Illinois comes in losers of four of its last five games. The Illini have been outscored in their last two games, 95-27, in losses to Purdue and Wisconsin.

Maryland got shut out, 23-0, on the road in Iowa last week, but I view the Hawkeyes as one of the top teams in the Big Ten. The Terrapins have taken care of business versus teams they’re supposed to beat this year, defeating Bowling Green by 31, Minnesota by 29, and Rutgers by 27.

Maryland is tough when it can run the football with running backs Ty Johnson and Anthony McFarland. Expect that to be the case on Saturday against an Illinois defense allowing 273 rushing yards per game and 6.1 yards per rush in Big Ten play.

Maryland is 4-3 and 3-1 at home while playing one of the nation’s toughest schedules. It gets a breather this week in the reeling Illini who are just 8-19 ATS in their last 27 as an away dog. The Terrapins romp at home.

Also check out The Pro Football Handle: NFL Week 8 has both a potential NFC Championship preview in Saints vs. Vikings and the worst game of the year with 49ers vs. Cardinals. The New York Football Giants are in the midst of a fire sale and the Oakland Raiders are officially in tank mode. There are some crazy lines this week, listen below for complete insight and some laughs:

Don't be a Square: Subscribe to our once-a-week newsletter for the latest sports betting news and insights
Get the latest content first.
We respect your privacy.