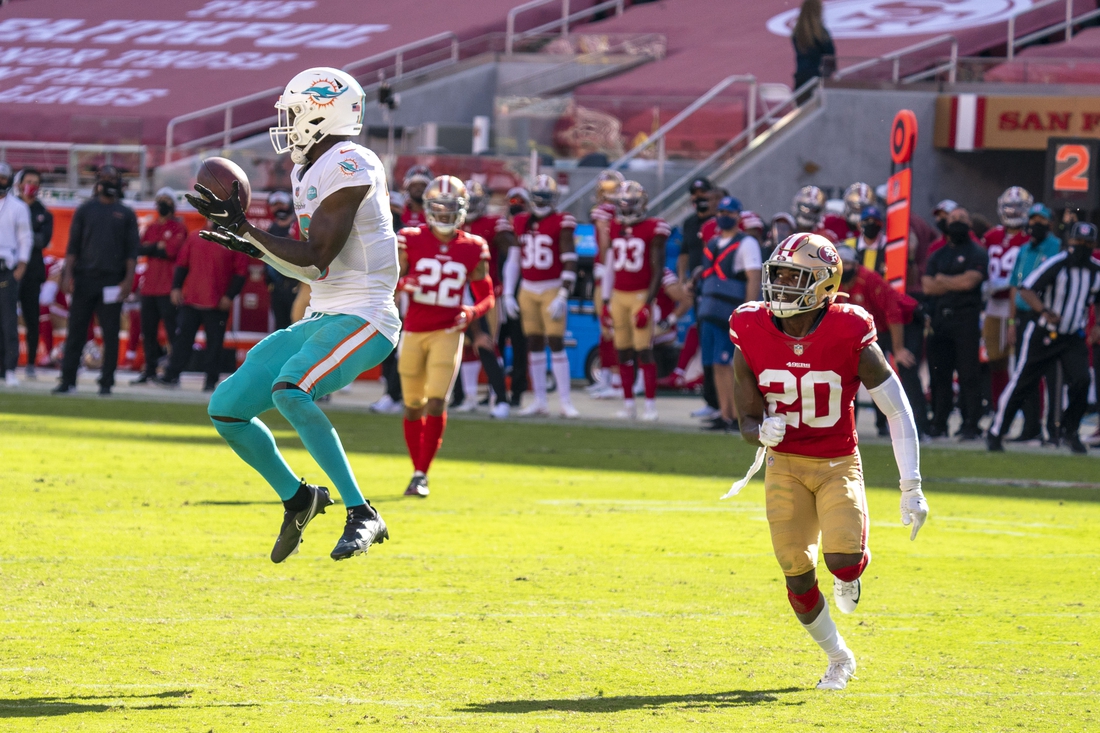 The much-improved Miami Dolphins, coming off an impressive 43-17 win over the San Francisco 49ers, must protect against a letdown when the winless New York Jets visit on Sunday.

Coincidentally, the turnaround started with a 26-18 victory last November over … the Jets.

New York (0-5) has been a mess this season, and that continued this week when general manager Joe Douglas decided to cut running back Le’Veon Bell, who made $27.5 million while playing just 17 games for the club.

Bell, who had been a three-time Pro Bowl player with the Pittsburgh Steelers, rushed for just 863 yards and a 3.3-yard average with the Jets, but he was hardly New York’s only problem.

Quarterback Sam Darnold, who missed last week’s 30-10 home loss to the Arizona Cardinals due to a shoulder injury, has been ruled out for the game at Miami.

“There’s pain every now and then, but I’m feeling a lot better,” Darnold said earlier this week. “It’s getting better every day.”

Prior to the injury, Darnold had seen his numbers regress. After going 7-6 last season with 19 TDs and 13 interceptions, Darnold is 0-4 this year with three TDs and four picks.

Joe Flacco, who led the Baltimore Ravens to a Super Bowl victory in the 2012 season, is set to start his second consecutive game in place of Darnold.

Flacco, 35, is an accomplished veteran, but he hasn’t had a winning season since 2017. Since then, he is 6-12 as a starter with 19 touchdown passes and 11 interceptions for three teams.

Meanwhile, Dolphins starting quarterback Ryan Fitzpatrick turns 38 next month, and he is playing as if he were a decade younger.

Fitzpatrick has three 300-yard games this season, and he is completing 70.6 percent of his passes. He is prone to taking sacks (40 last year and eight this season) and throwing interceptions (13 last year and five this season), but he also scrambles endlessly, often creating havoc on defenses.

Fitzpatrick is playing behind a rebuilt offensive line. At right tackle, rookie second-round pick Robert Hunt made his first start against the 49ers, playing every offensive snap.

“He showed himself well,” Dolphins second-year coach Brian Flores said. “The moment wasn’t too big for him.”

Rookie first-round pick Austin Jackson, who had been playing left tackle, is out injured. Flores moved right tackle Jesse Davis to the left side to replace Jackson, creating the opening for Hunt. Miami is also starting a rookie at right guard, fourth-round pick Solomon Kindley.

The big story for the Dolphins’ defense is the play of star cornerback Xavien Howard, who has one interception in each of his past three games. Howard shared the NFL lead with seven interceptions in 2018 but was limited to just five games last year due to a knee injury.

“That dude always seems to find a way to get the ball,” Dolphins cornerback Byron Jones said of Howard, who has 15 interceptions in his past 27 games. “It’s cool to be out there with one of the best.”

Howard and Jones, who both made the Pro Bowl in 2018, will look to shut down a Jets passing game that has just wide receiver Jamison Crowder in terms of reliable playmakers. In just three games this year, Crowder has 22 catches for 335 yards and two touchdowns.