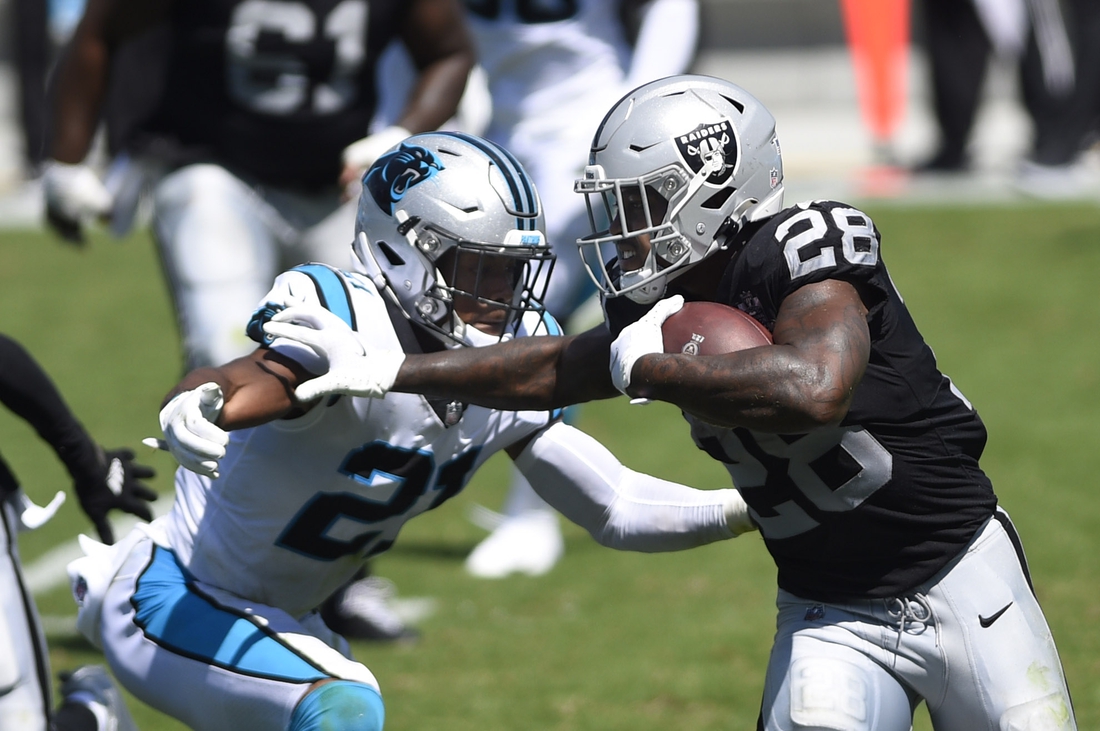 Josh Jacobs’ third touchdown run provided the go-ahead points as the Las Vegas Raiders posted a 34-30 victory over the Carolina Panthers in the teams’ season opener on Sunday afternoon in Charlotte, N.C.

The outcome spoiled the debut for Panthers coach Matt Rhule.

It was the first game for the Raiders since the franchise relocated to Las Vegas from Oakland.

Trailing 30-27, Jacobs scooted around the right side for a 6-yard scoring run with 4:08 remaining in the fourth quarter. It marked the seventh lead change of the game.

The Raiders defense made a fourth-and-1 stop at their own 46-yard line with 1:11 left to help clinch the outcome. By the time the Panthers regained possession at their own 27, there were eight seconds to play.

Derek Carr completed 22 of 30 passes for 239 yards and one touchdown for Las Vegas. Jacobs gained 93 rushing yards on 25 carries.

Quarterback Teddy Bridgewater, in his first game for Carolina, was 22-for-34 for 270 yards and one touchdown. Running back Christian McCaffrey scored twice to highlight his 96-yard rushing performance.

Earlier in the fourth quarter, Carolina wiped out a 27-15 deficit.

McCaffrey scored on a 3-yard run with 12:32 left as part of a drive that included a fourth-and-1 conversion. Then Bridgewater’s pass to Robby Anderson went for a 75-yard score. The duo also hooked up for a two-point conversion.

The back-and-forth nature began in the first half.

Carr threw a 23-yard scoring pass to Nelson Agholor to put the Raiders ahead with 1:54 to play in the first half.

Jacobs scored the first points for Las Vegas on a 1-yard run in the first quarter. He tacked on a 7-yard scoring run in the third quarter.

McCaffrey reached the end zone on a 6-yard run in the first quarter.

Carolina’s Joey Slye made first-half field goals from 47, 46 and 31 yards – the last of those on the final play before halftime as the Panthers pulled within 17-15.

The Raiders lost linebacker Nick Kwiatkoski to a pectoral injury in the third quarter.

Fans weren’t allowed to attend the game due to state restrictions related to the coronavirus pandemic.