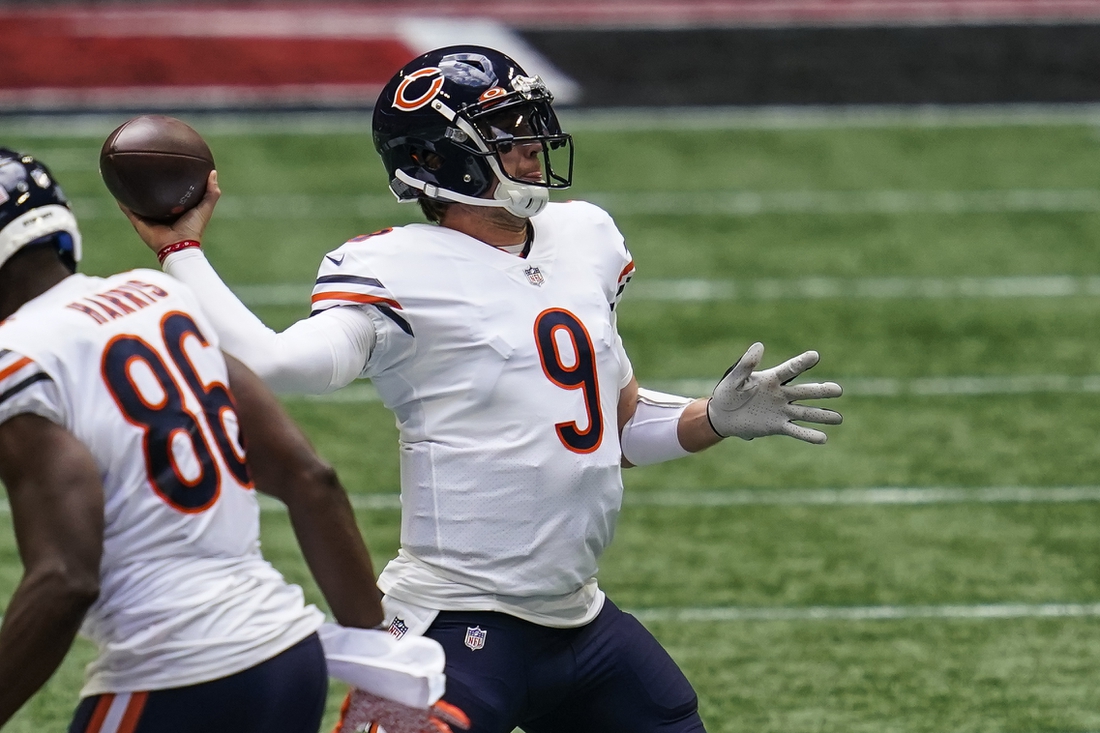 Nick Foles came off the bench and tossed three touchdown passes in the fourth quarter to rally the Chicago Bears, who sent the host Atlanta Falcons to another stunning, second-half collapse on Sunday.

Foles replaced an ineffective Mitchell Trubisky and completed the rally with a go-ahead, 28-yard touchdown pass to Anthony Miller with 1:53 left. Bears safety Tashaun Gipson intercepted Matt Ryan on the Falcons’ next drive to seal the victory.

Chicago (3-0) remained unbeaten after three weeks for the first time since 2013. Off to its worst start since 2007, Atlanta (0-3) led 26-10 entering the fourth quarter one week after blowing a 19-point halftime lead against the Dallas Cowboys.

Foles finished 16-of-29 passing for 188 yards with the three scores and one interception. Allen Robinson had 10 receptions for 123 yards for Chicago, which lost running back Tarik Cohen to a knee injury.

Matt Ryan completed 19 of 38 passes for 238 yards with one touchdown and the late interception, and Calvin Ridley had five receptions for 110 yards for Atlanta.

Ryan Neal intercepted a Dak Prescott pass in the end zone with six seconds remaining to clinch the victory for Seattle (3-0). The Cowboys fell to 1-2.

Wilson completed 27 of 40 passes for 315 yards, setting a pair of early season passing marks in the process. He became the first quarterback in NFL history to throw at least four touchdown passes in each of his team’s first three games, and his 14 touchdown passes are the most by any player through Week 3 in NFL history. Three of his touchdowns went to Tyler Lockett, who had nine receptions for 100 yards. Metcalf caught four passes for 110 yards, and Chris Carson rushed for a game-high 64 rushing yards on 14 carries.

The Rams (2-1) overcame a 25-point, third-quarter deficit and took a late 32-28 lead before Allen drove the Bills 75 yards in the final four minutes for the game-winner. After the Bills’ offense was kept in check for much of the second half, Allen still was able to rally his team to cap a day when he was 24 of 33 for 311 yards with one interception.

Los Angeles appeared set to match the third-largest comeback in NFL history and the longest in franchise history when they scored 29 unanswered points, all in the second half. Their four consecutive TD drives came on a 1-yard run from quarterback Jared Goff, two Goff TD passes and a 1-yard, go-ahead score on the ground by Darrell Henderson Jr. Goff completed 23 of 32 passes for 321 yards and two touchdowns. Henderson rushed for 114 yards.

James Conner rushed for 109 yards and the go-ahead touchdown in the fourth quarter as host Pittsburgh pounded out a win over Houston.

Conner plowed in for a 12-yard touchdown with 6:24 remaining to cap a 12-play, 79-yard drive that chewed 7:03 off the clock and provided the Steelers (3-0) a 26-21 lead. Ben Roethlisberger completed a two-point conversion pass to JuJu Smith-Schuster that extended the lead to seven.

Pittsburgh rushed for 169 yards and ran 76 plays compared to just 47 for the Texans (0-3). Houston had little success running the football, totaling 29 yards on 15 attempts.

Burkhead ran for two scores and also caught a TD pass for the Patriots (2-1), who rushed for a season-best 250 yards. Cam Newton passed for 162 yards, with one touchdown and one interception, Nick Folk added three field goals and the Patriots defeated the Raiders for the sixth straight time.

Derek Carr was 24 of 32 passing for 261 yards and two touchdowns for Las Vegas (2-1). Hunter Renfrow and Foster Moreau caught touchdowns, and Josh Jacobs totaled 83 yards (71 rushing, 12 receiving) for the Raiders.

Stephen Gostkowski drilled a career-best six field goals — including a game-winning 55-yarder with 1:48 left — and Derrick Henry ran for 119 yards and his first two touchdowns of the season as Tennessee remained unbeaten by defeating winless Minnesota in Minneapolis.

Kirk Cousins passed for 251 yards, three touchdowns and two interceptions, Dalvin Cook rushed for a career-high 181 yards and a touchdown and rookie Justin Jefferson had seven receptions for 175 yards and a score to keep Minnesota (0-3) close.

Nick Chubb rushed for 108 yards and two touchdowns to spur Cleveland to a double-digit win over visiting Washington.

Haskins completed 21 of 37 passes for 224 yards for Washington (1-2), but his third pick — snagged by Browns linebacker B.J. Goodson — set up Cleveland’s clinching touchdown.

One week after the 49ers (2-1) beat the New York Jets, Mullens passed for one touchdown while backup running back Jeff Wilson Jr. scored on a run and a catch as San Francisco rolled up a 420-231 advantage in total yards despite missing more than a half-dozen key players, including quarterback Jimmy Garoppolo, tight end George Kittle, defensive end Nick Bosa and cornerback Richard Sherman.

Wilson’s two fourth-quarter scores iced the win, one coming on a 19-yard pass from Mullens and the second on a 2-yard run with 3:35 to play. Mullens finished 25 of 36 with no interceptions. Quarterback Daniel Jones led the Giants in rushing with five carries for 49 yards, but he struggled in the passing game, going 17 of 32 for 179 yards with one interception.

Neither Philadelphia nor visiting Cincinnati scored in a 10-minute overtime as they played to a tie.

Eagles kicker Jake Elliott lined up for a potential game-winning 59-yard field with 19 seconds remaining, but guard Matt Pryor was whistled for a false start. The Eagles opted to punt instead of attempting a 64-yard field goal. Quarterback Carson Wentz completed 29 of 47 passes for 225 yards, one touchdown and two interceptions for
Philadelphia (0-2-1). Wentz scored on a 7-yard run with 21 seconds left to send the game into OT.

The Bengals (0-2-1) were led by rookie quarterback Joe Burrow, who finished 31 of 44 for 312 yards and two touchdowns. Tee Higgins caught both TDs, and Tyler Boyd had 10 receptions for 125 yards.

Rivers reached the 400-touchdown mark with a 1-yard scoring pass to Mo Alie-Cox in the second quarter and passed the 60,000-yardage mark just before halftime. Rivers ranks sixth in NFL history in both categories. He completed 17 of 21 passes for 217 yards and one touchdown for the Colts (2-1).

Xavier Rhodes (two interceptions) and T.J. Carrie each returned interceptions for scores for Indianapolis. The Jets (0-3) had just 260 total yards and quarterback Sam Darnold finished 17 of 29 passing for 168 yards with one touchdown and three interceptions.

Chris Godwin had five receptions for 64 yards and a score, Scotty Miller had three catches for a game-high 83 yards and Ronald Jones II rushed for 53 yards for the Buccaneers (2-1). Tampa Bay tight end Rob Gronkowski was targeted seven times and finished with six catches for 48 yards.

The result snapped the Panthers’ 10-game losing streak that extended to last season. It also allowed Carolina (1-2) to avoid what would have been the fifth 0-3 start in franchise history.

Panthers quarterback Teddy Bridgewater was 22 of 28 for 235 yards and a touchdown. Chargers rookie quarterback Justin Herbert, in his second start in place of an injured Tyrod Taylor, went 35-for-49 for 330 yards with a touchdown and an interception.

Matt Prater made a 39-yard field goal as time expired, and Detroit snapped an 11-game losing streak with the victory over Arizona in Glendale, Ariz.

The Lions took their game-winning drive into the red zone to set up Prater’s game-winning field goal, the 16th of his career.