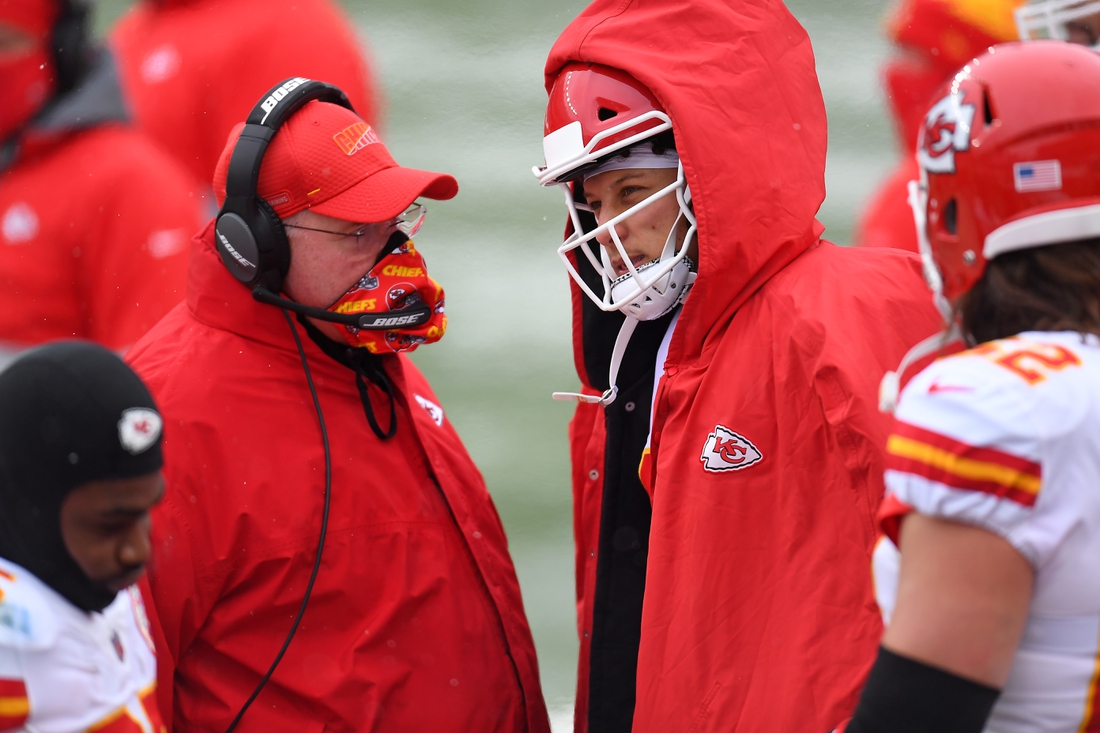 The way Kansas City quarterback Patrick Mahomes sees it, he and coach Andy Reid get a chance to check off two accomplishments with a win on Sunday in Super Bowl LV in Tampa.

“To go out there and get to have a chance to repeat and get to do it against the best, I mean, it’s something special and I’m excited for the opportunity,” he said.

Mahomes and Reid’s goal of winning the Super Bowl and denying Tampa Bay quarterback Tom Brady his seventh one in the process would put Mahomes and Reid in elite company.

Mahomes and Reid would be the first quarterback-coach duo to win consecutive Super Bowls since Brady and Bill Belichick led the New England Patriots to titles in 2003-04 seasons.

The comparisons between Mahomes and Brady really started heating up during the wintry night of Jan. 20, 2019. That’s when Brady rallied the Patriots to a 37-31 win over Mahomes’ Chiefs in Arrowhead Stadium to advance to Super Bowl LIII.

Before leaving the stadium, Brady found Mahomes inside the Chiefs locker room and offered him encouragement.

“It kind of just re-emphasized that I was doing things the right way, that I was putting in the right work and that I would have more opportunities to be in these games,” Mahomes said. “I’ve been lucky enough to be in two more of them since and win both of those. So to get to go up against the great [Brady] and a great football team as well, I’m excited for the opportunity.

“The biggest thing Tom said to me was just to stay with the process and keep being who I am. That’s something that’s important. As a guy who’s had so much success every year he’s been in the NFL, he goes out there every single day and treats it like it’s the most important day. That’s something that I’ll try to do for my entire career.”

“Well, I would say it was unique,” Reid said. “I mean, he didn’t have to do that. He is arguably the best quarterback to ever play the game and he surely didn’t have to come over and say a word. But he did that, and I think for a young quarterback to have somebody of his stature do that, I think was a tremendous gesture and it was heartfelt.

“He didn’t have to do it and he wasn’t putting on a show. There was nobody there to really see it, so it was really just his respect for Pat and in return, Pat’s respect for him.”

Reid can also earn a lot of respect regarding his place among the NFL’s all-time great coaches with a win on Sunday, which likely won’t be possible unless Mahomes plays well.

If the Chiefs win on Sunday, Reid will have two Super Bowl wins, making him one of 10 coaches with exactly two Super Bowl titles. Of the nine men who have two titles, five – Don Shula, Tom Landry, Bill Parcells, Jimmy Johnson and Vince Lombardi — received the call from Canton. The other four — Tom Flores, George Seifert, Tom Coughlin and Mike Shanahan — are on the outside looking in though Flores is the Coach Finalist and could earn induction on Saturday.

Mahomes said the Chiefs have been focused on winning Super Bowl LV since the season’s outset.

“Instead of soaking in all the glory of winning the Super Bowl last year,” Mahomes said, “we went back to work every single day to make ourselves better and to prepare ourselves for every single situation that could arise and it put us in this game.”