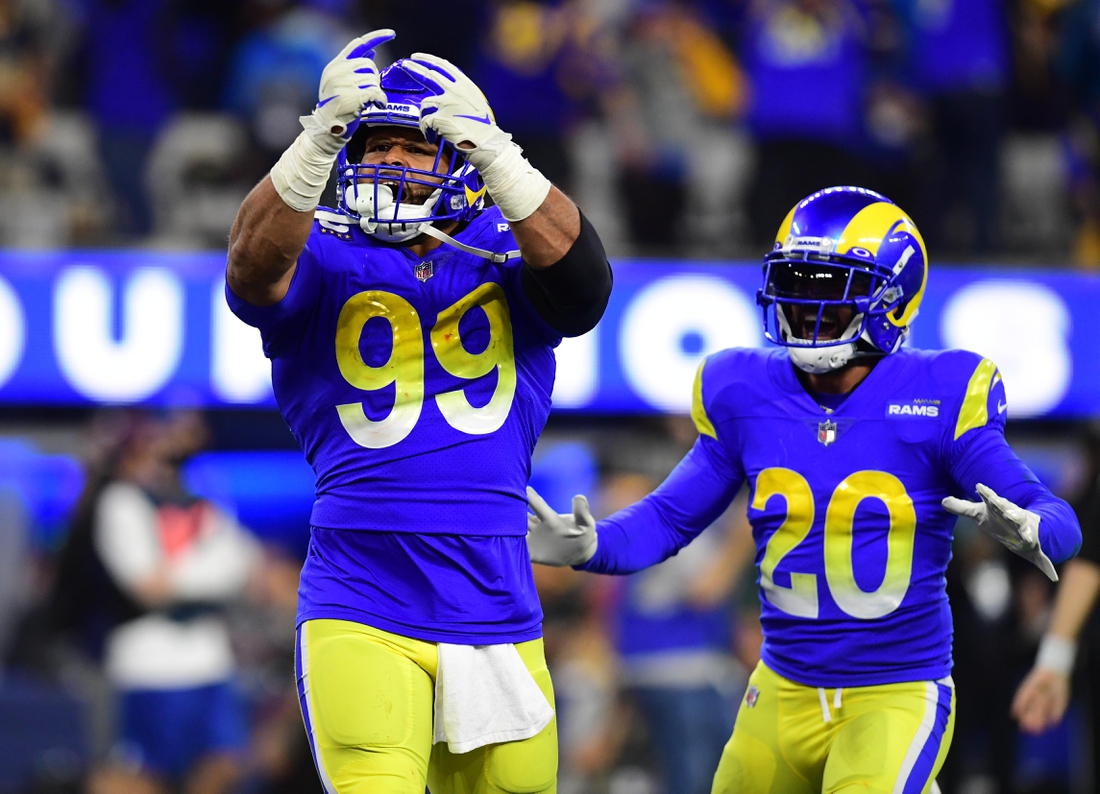 It is clear Aaron Donald knows there is something missing on his resume.

Otherwise, the three-time NFL Defensive Player of the Year for the Los Angeles Rams wouldn’t have exuberantly pointed at his ring finger after forcing the clinching interception in the NFC title game victory over the San Francisco 49ers on Jan. 30.

That finger feels awfully lonely to the Donald, an eight-time Pro Bowl defensive tackle. The 30-year-old veteran is obsessed with filling that void when the Rams square off against the Cincinnati Bengals in Super Bowl LVI on Sunday in Inglewood, Calif.

This will be the second Super Bowl for Donald. He and his defensive mates did their part but the offense was missing in action during a 13-3 loss to the New England Patriots in Super Bowl LIII to cap the 2018 season.

“The only thing I’m lacking now is being a world champion.”

Typically, it is quarterbacks who are measured by whether or not they have a Super Bowl ring. However, Donald has reached such lofty levels in his stellar career — he’d be a shoo-in Hall of Famer if he retired next week — that there is a lot of focus on his quest to earn a ring.

Donald has 98 regular-season sacks and 23 forced fumbles in his eight NFL seasons — the first two in St. Louis before the Rams moved back to California.

He has recorded 10 or more sacks six times, including a league-leading 20.5 in 2018. Donald logged 12.5 sacks this season, plus an additional 1.5 in his three playoff games.

Also, he is admired by his teammates, coaches and everyone in the organization for the way he handles his business.

“Consistency is the truest measure of performance. All he’s done is just get better,” said Sean McVay, finishing his fifth season as Donald’s head coach. “When you know people are keying in on you, they’re gonna have game plans, and you still find ways to produce, that’s greatness.

“The way he goes about building his teammates up, bringing them with him, that’s the greatness in Aaron Donald. When you have something bigger than yourself to play for and motivation that drives you, what a powerful thing that is.”

Bengals receiver Tyler Boyd knows how dangerous a motivated Donald can be. The two were college teammates at Pitt when Donald was terrorizing Atlantic Coast Conference offensive linemen.

“That’s one of my guys, one of my closest friends,” Boyd recently told reporters. “Went to battle with him at Pitt. Just seeing him prosper and being the best player in the league and seeing him compete for Super Bowls and things like that made me want to get to that position because I know how hard he worked and how he got there.”

Donald didn’t record a sack of Tom Brady in his previous Super Bowl. Surely, he would like to bring down Bengals quarterback Joe Burrow in the backfield. However, Donald is consistent about one thing — it isn’t the individual performance that matters. It is the team winning the game.

Remember, he has that empty ring finger, and he doesn’t want to point to it still being empty sometime later in his career.

“Emotions were running high and that’s what happens,” Donald said of the celebratory act against the 49ers. “The ultimate goal is to be playing in this game. That’s what you work for.

“It’s a goal I’ve been chasing and trying to accomplish.”