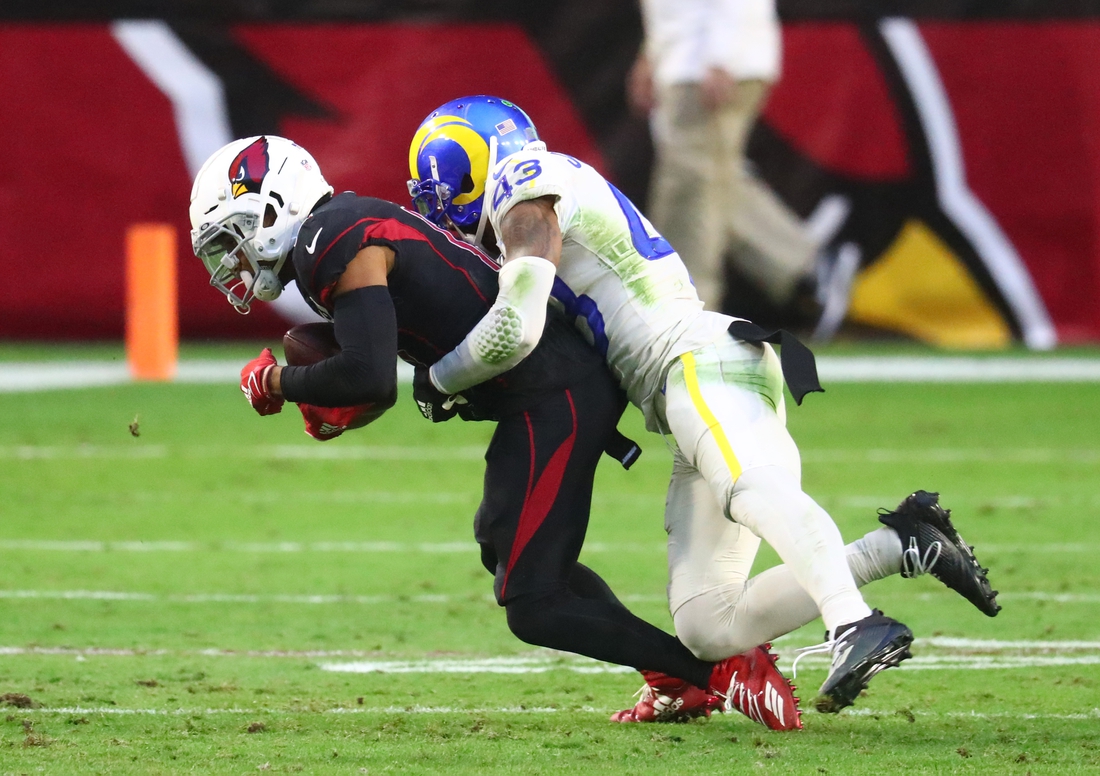 Rams, Cardinals going all out in push for playoff spot

With their seasons on the line, a pair of NFC West rivals will meet on Sunday in what amounts to an early playoff game as the Arizona Cardinals face the Los Angeles Rams at Inglewood, Calif.

The short-handed Rams (9-6) need a victory or a Chicago Bears (8-7) loss to the Green Bay Packers to make the actual playoff field, but they maintain they will play Sunday’s game as if a loss means elimination. The Cardinals (8-7) are in a true win-or-go-home scenario.

The Rams will be without quarterback Jared Goff, who sustained a thumb injury last Sunday at Seattle and underwent surgery. John Wolford, who has not taken a snap in a regular-season game, is scheduled to start for a team that has lost consecutive games.

Also expected to be out is wide receiver Cooper Kupp, who tested positive for COVID-19, according to NFL Network. The Rams have not confirmed a positive test for their top receiver, who leads the team with 92 receptions and 974 yards.

The offense has other issues as running back Darrell Henderson (high ankle sprain) is out while running back Malcolm Brown (shoulder) has been limited at practice. Rookie running back Cam Akers (ankle) will try to get back on the field after not playing against the Seahawks.

“I believe in this team,” Rams coach Sean McVay said. “I trust in their mental toughness and I think that the overarching message is let’s put everything that we have into this. Let’s not be afraid to put it all out there one more time. Get back up off the mat and keep swinging and have no regrets no matter how this thing ends up.”

The Rams are in their near do-or-die situation after failing to clinch a playoff berth in a Week 15 loss to the previously winless New York Jets before also losing at Seattle in Week 16.

The Cardinals were dealt a blow last week when they were completely taken out of their game in a 20-12 loss to the San Francisco 49ers. The defeat came after consecutive victories over the New York Giants and Philadelphia Eagles.

The Cardinals, who are trying to get into the playoffs for the first time since 2015, will have quarterback Kyler Murray at the helm even though he sustained a right leg injury on his final pass attempt Sunday.

The Cardinals do have questions at running back with Chase Edmonds nursing a hip injury that has his status in doubt. Murray was a full participant in practice Wednesday, but Edmonds did not participate.

Also not participating for the Cardinals on Wednesday were wide receivers DeAndre Hopkins (hip) and Larry Fitzgerald (groin). Members of the defense missing at practice Wednesday were linebacker Haason Reddick (hip) and safety Chris Banjo (hip).

The Rams took linebacker Micah Kiser (knee) off injured reserve, but he still is not expected to play Sunday.