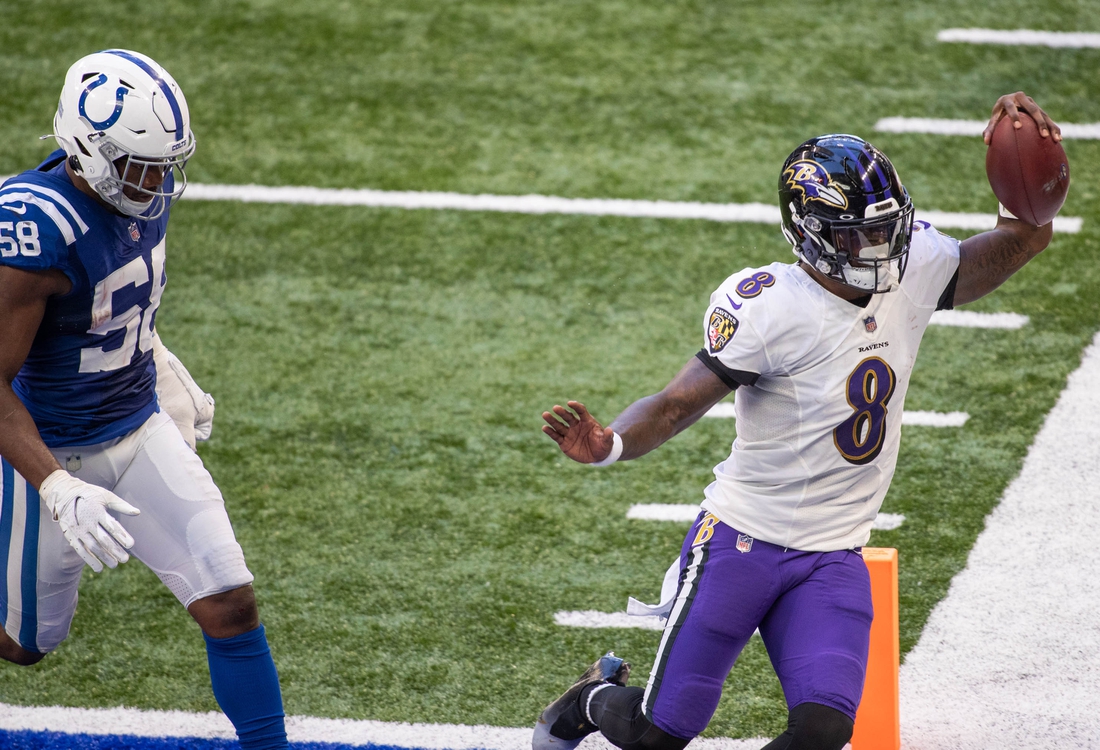 Success away from Baltimore is nothing new for the Ravens, who have won 10 straight road games entering Sunday night’s encounter with the New England Patriots in Foxborough, Mass.

Lamar Jackson rushed for a touchdown for the third time in five games in Baltimore’s 24-10 win at Indianapolis last Sunday, however the reigning NFL MVP enjoyed a better performance in his last meeting with the Patriots. Last year, Jackson accounted for three scores (two rushing, one passing) as Baltimore handed New England its first defeat of the season, a 37-20 decision on Nov. 3.

That may feel like a lifetime ago for the Ravens, with Jackson admitting Wednesday that opposing defenses appear to be in tune with what the Ravens plan to do prior to the snap.

“They’re calling out our plays, stuff like that,” Jackson said on The Rich Eisen Show. “They know what we’re doing. Sometimes stuff won’t go our way if they’re beating us to the punch.”

After the Ravens ranked first in scoring last season by averaging 33.2 points, their scoring in 2020 has slipped to 28.4 — eighth-best in the league.

Despite the numbers crunch, New England coach Bill Belichick knows his team has to keep a keen eye on Jackson.

“You have to respect (Jackson), and that opens up other things for other people as well,” Belichick said. “I don’t think he’s lost anything in terms of running the ball.”

Baltimore still boasts the NFL’s top-ranked ground attack under Jackson, who needs just 31 yards to join New England’s Cam Newton as the only NFL quarterbacks to rush for at least 500 yards in each of their first three seasons.

The Ravens could see another key cog return in Pro Bowl running back Mark Ingram II, who was listed as limited in practice on Wednesday after missing the last two games with an ankle injury. Ingram, who joins Jackson, Gus Edwards and rookie J.K. Dobbins in the versatile ground attack, rolled up 144 scrimmage yards (115 rushing, 29 receiving) against the Patriots last season.

New England (3-5) aims to build off the momentum of Monday’s 30-27 win over the New York Jets. The decision snapped a four-game losing streak for the Patriots.

Newton authored his best performance since a 397-yard effort in a Week 2 loss to Seattle, although he failed to throw a touchdown pass for the fourth consecutive contest. Newton completed 27 of 35 passes for 274 yards and recorded his third game this season with two rushing touchdowns.

“We’ve played against Cam Newton before, the last time we played against him he had a very good game against us,” Ravens coach John Harbaugh said. “We remember that, so that will be the challenge. He’s an excellent quarterback. Very aware player, very talented, great arm (and) can beat you with his legs as well.”

Jakobi Meyers jolted the Jets with career highs in both catches (12) and receiving yards (169).

Cornerback J.C. Jackson (knee), who is also on that list, leads the NFL with five interceptions.

Also on Wednesday, the Ravens activated Marlon Humphrey off the reserve/COVID-19 list. Last year against the Patriots, the All-Pro cornerback returned a fumble 70 yards for a touchdown.