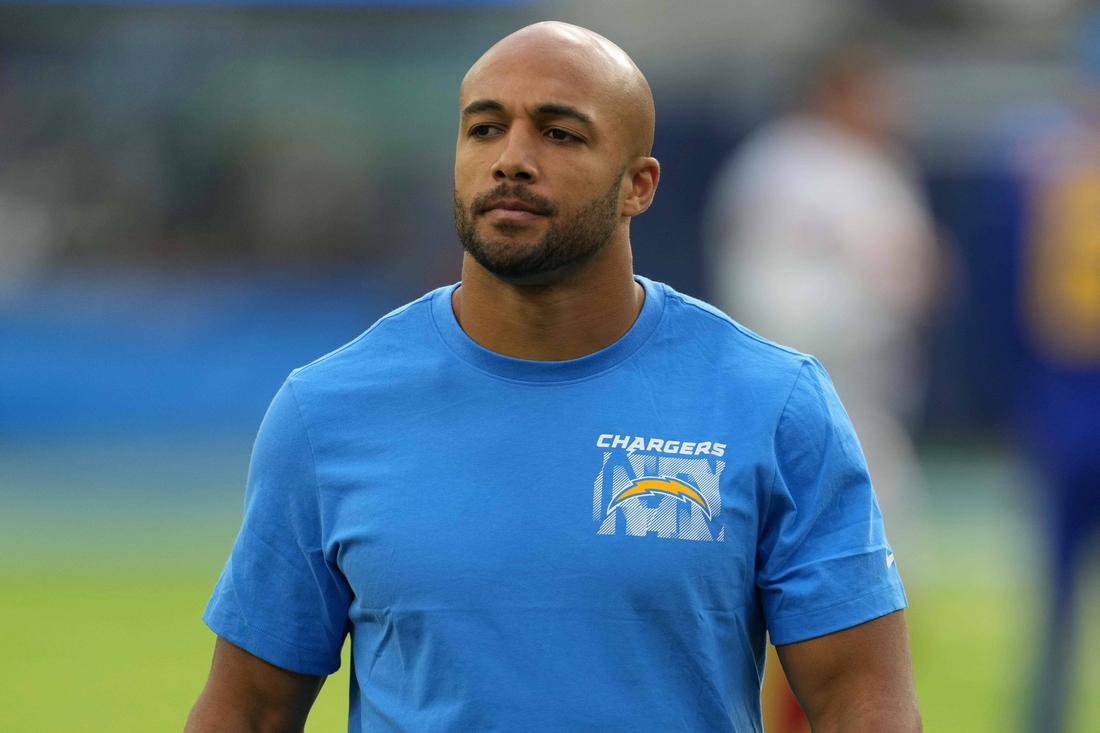 The Los Angeles Chargers officially placed running back Austin Ekeler on the reserve/COVID-19 list Wednesday, while wide receiver Jalen Guyton also was designated to the list.

The Chargers now have 11 players on the reserve/COVID list, with multiple reports saying that Sunday’s road game against the Houston Texans is on schedule to be played.

Ekeler was reported to be headed to the list earlier this week, along with defensive end Joey Bosa. On Monday, the Chargers ruled Bosa out for Sunday, but Ekeler was not officially put on the list until Wednesday.

Chargers head coach Brandon Staley said Wednesday that he is hopeful Ekeler and Guyton both will end up playing Sunday. 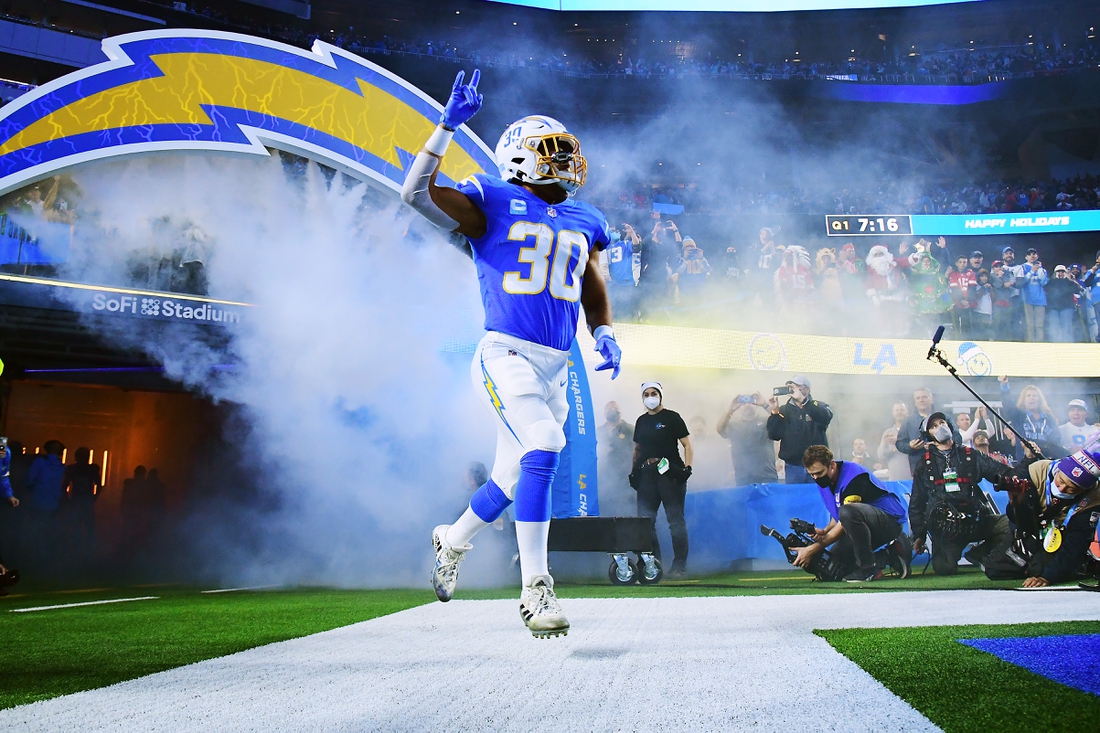 The Chargers, however, have yet to announce any such moves as of early Monday afternoon. The team is expected to add more names to the list, per the reports.

Ekeler, 26, leads the team in carries (173), rushing yards (789) and rushing touchdowns (10) in 14 games this season. He also ranks third in catches (62) and receiving yards (558), while his seven receiving scores are tied with Mike Williams for the club lead.

Bosa, 30, went on the COVID-19 list last month as a close contact, however, he did not miss a game. The three-time Pro Bowl selection has 9.5 sacks and six forced fumbles to go along with 43 tackles this season.

Linsley, 30, has started all 14 games this season for the Chargers and 113 in which he has played in his NFL career.

Los Angeles Chargers running back Austin Ekeler missed practice for the second straight day on Friday and is listed as questionable to play against the New England Patriots.

“It felt much better the last two days, and real hopeful that he can play,” Staley said on Friday.

Larry Rountree’s 24 carries are the second-most on the team. Justin Jackson and Joshua Kelley are also candidates for more work in the backfield should Ekeler sit out against the visiting Patriots (3-4) on Sunday.

Linebacker Drue Tranquill, who is nursing a chest injury, also was listed as questionable after being limited in practice for the third straight day. 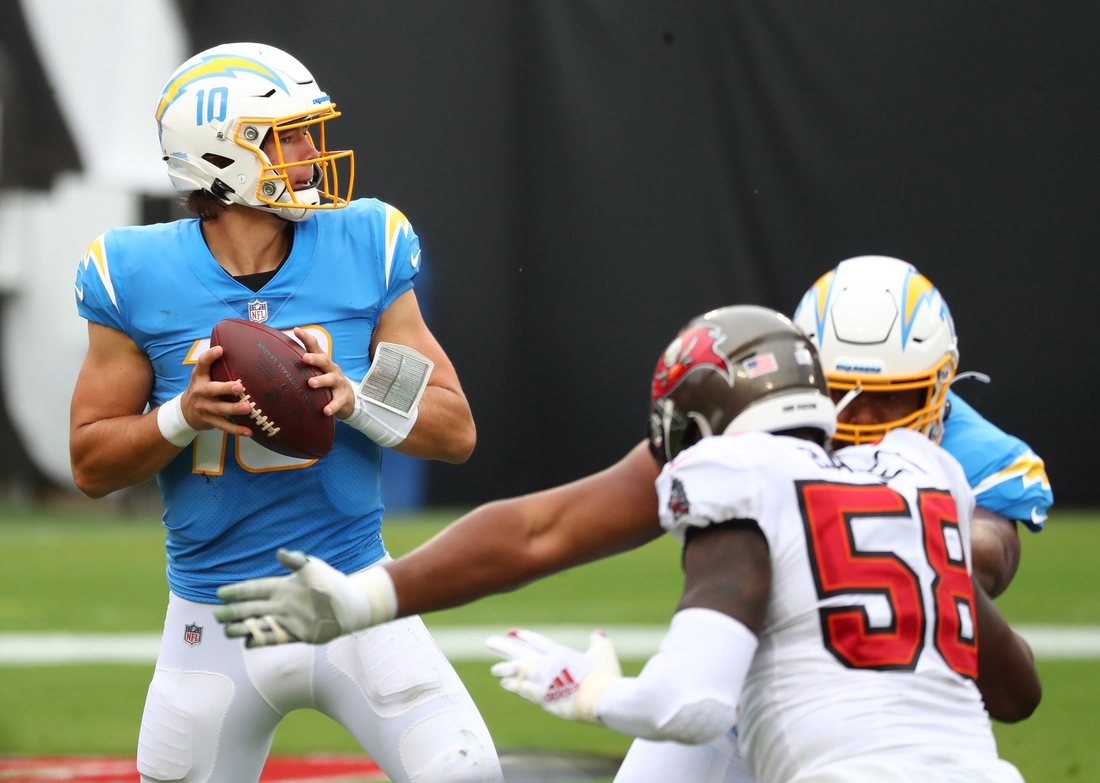 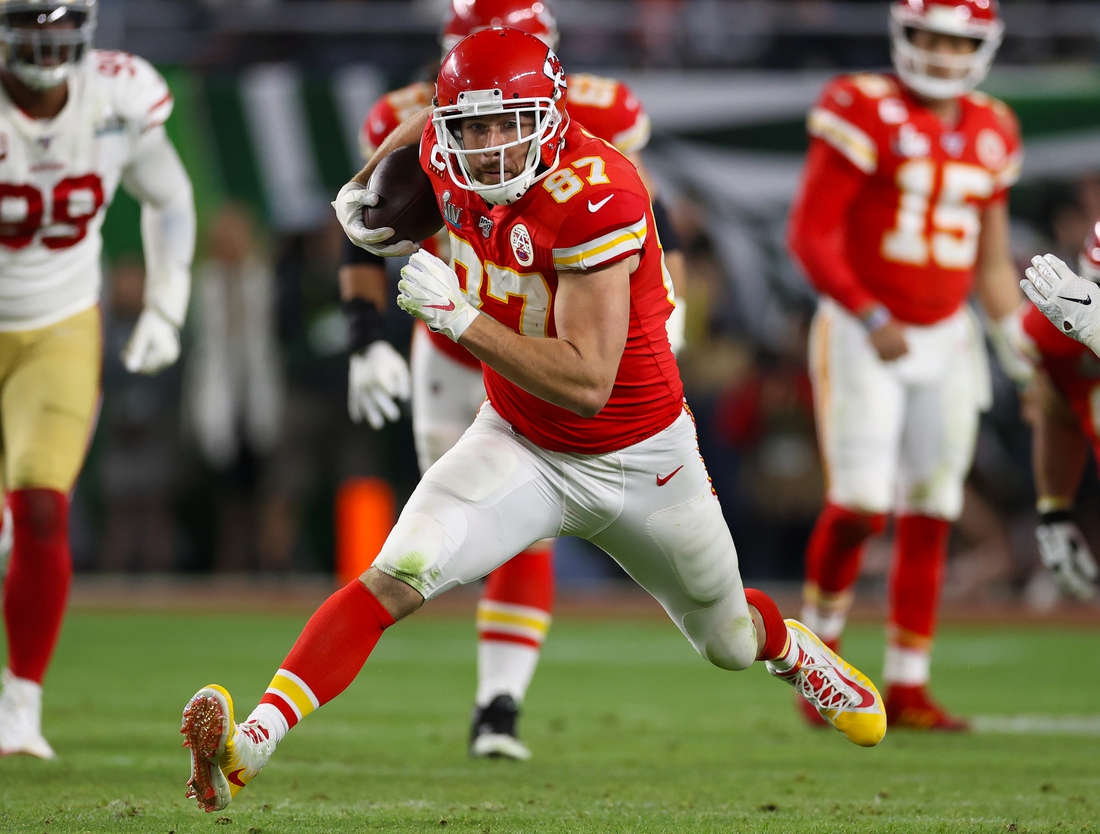 Los Angeles Chargers running back Austin Ekeler is active and expected to play Sunday against the Washington Football Team.

His availability had been in question this week as he missed practice time while nursing a hamstring injury.

Ekeler, 26, began last season as the Chargers No. 1 back, but was limited to 10 games after suffering hamstring and knee injuries in Week 4.

In four seasons, all with the Chargers, Ekeler has rushed for 1,901 yards and nine touchdowns and has 2,079 receiving yards and 16 scores.

Both team finished the 2020 season at 7-9. Despite the sub-.500 record, Washington won the NFC East and lost in the wild-card round of the playoffs 31-23 to eventual Super Bowl champion Tampa Bay. 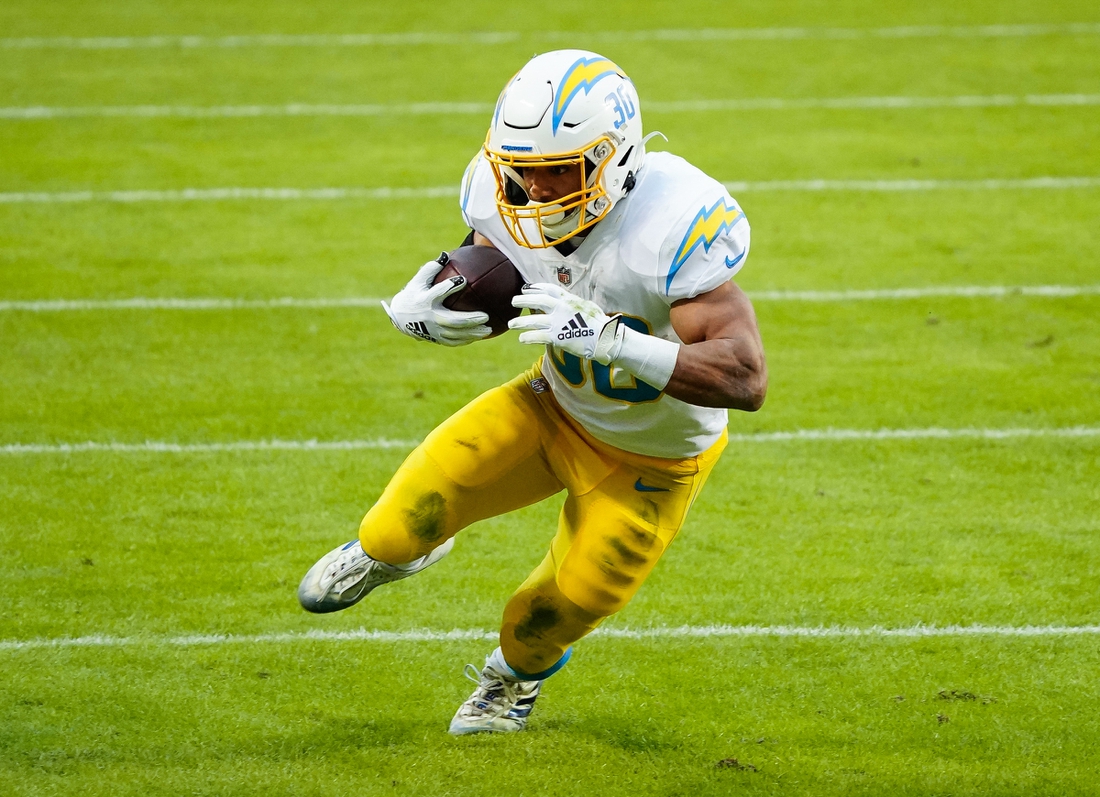 The Los Angeles Chargers practiced without Austin Ekeler on Wednesday as the running back was sidelined with a hamstring injury.

Ekeler, 26, spent the session working on the side with trainers.

The Chargers face the Washington Football Team on the road on Sunday in their season opener.

Ekeler began last season as the Chargers No. 1 back, but was limited to 10 games after suffering hamstring and knee injuries in Week 4.

In four seasons, all with the Chargers, Ekeler has rushed for 1,901 yards and nine touchdowns and has 2,079 receiving yards and 16 scores. 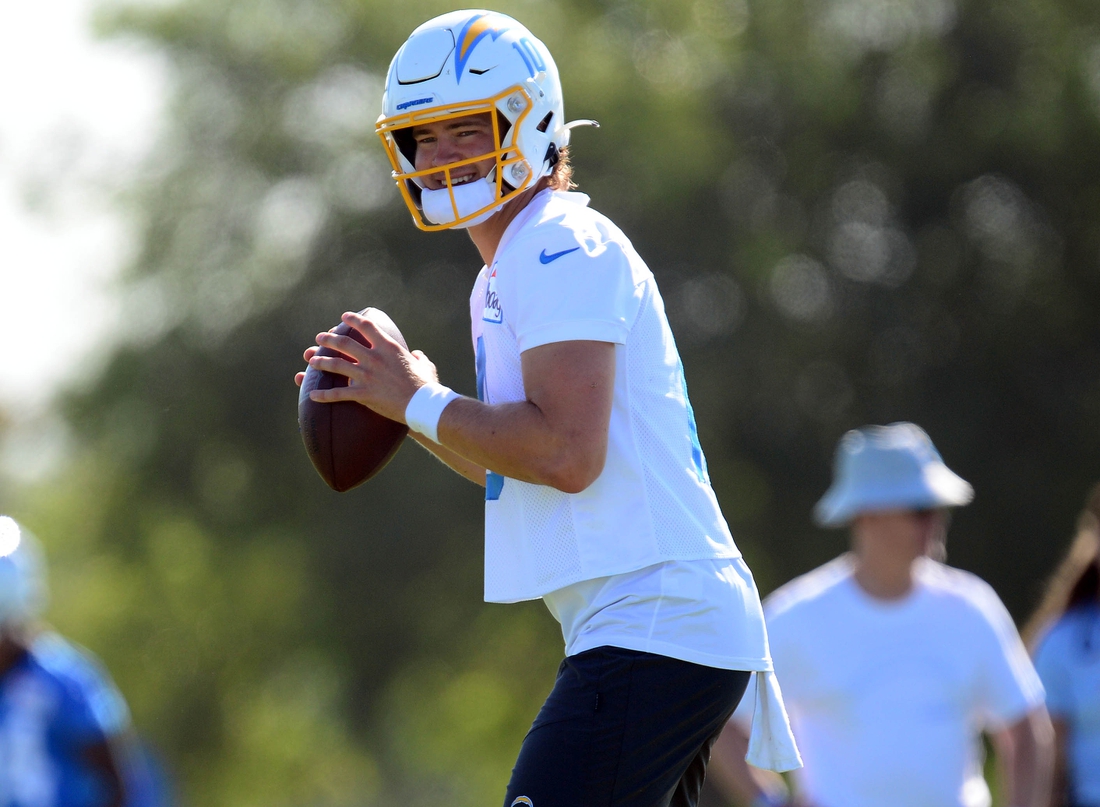 The players working to earn a spot on the Los Angeles Chargers roster will have more opportunities to show their stuff.

Staley was an assistant coach on the Los Angeles Rams staff of Sean McVay, who said recently that new quarterback Matthew Stafford will be on the sidelines for the preseason games

The Chargers open the preseason Saturday against the Rams at SoFi Stadium, which the two teams share. Washington Football Team will host the Chargers in the season opener on Sept. 12. 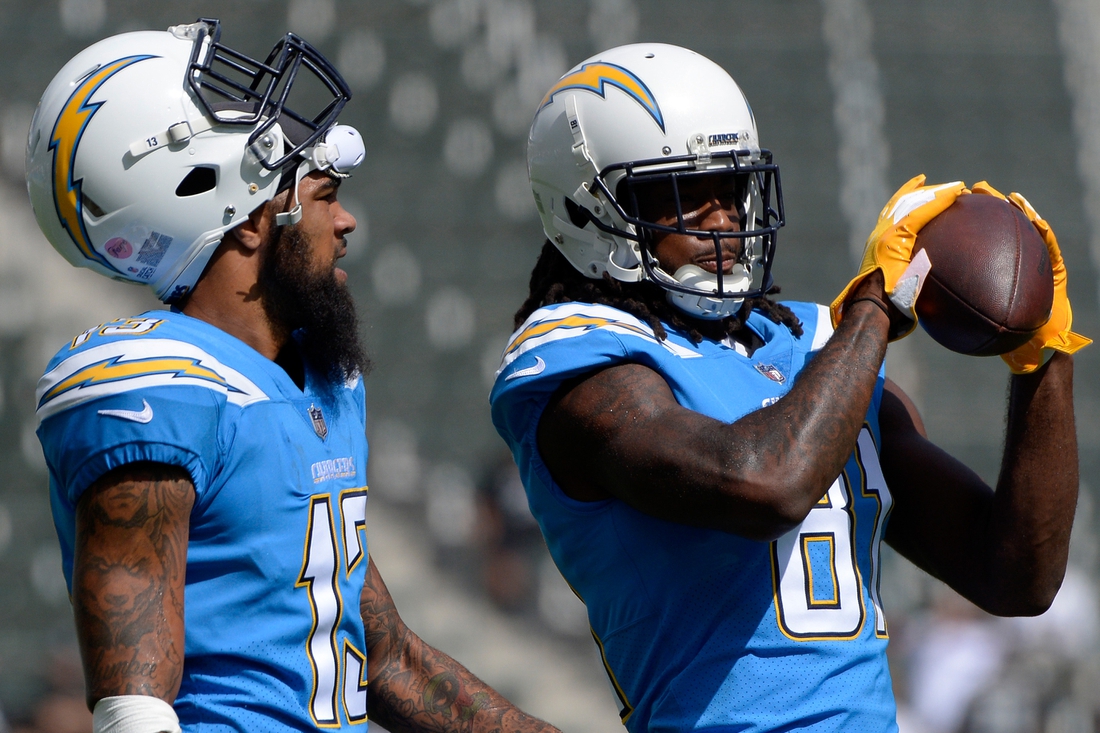 ESPN reported that Keenan Allen (hamstring) likely will be limited if he plays at all, while fellow wide receiver Mike Williams (back) is not expected to compete.

While the Chargers (4-9) may be without two of rookie Justin Herbert’s top targets, multiple media outlets reported that running back Austin Ekeler (quad) is expected to be in the lineup against the Raiders (7-6).

Allen is second in the NFL with 99 catches. His 975 receiving yards and eight touchdowns lead the team.

Williams, who has 36 catches for 572 yards and four touchdowns, joined Allen in being limited participants in practice on Tuesday and Wednesday.

Ekeler leads the Chargers with 407 yards rushing despite playing in just seven games this season. He also has proven to be a capable outlet with 41 catches for 328 yards.

Should Allen and Williams sit out, Herbert will need to rely on tight end Hunter Henry and wideout Jalen Guyton, among others. Kalen Ballage will be looked upon to lead the backfield should Ekeler sit out. 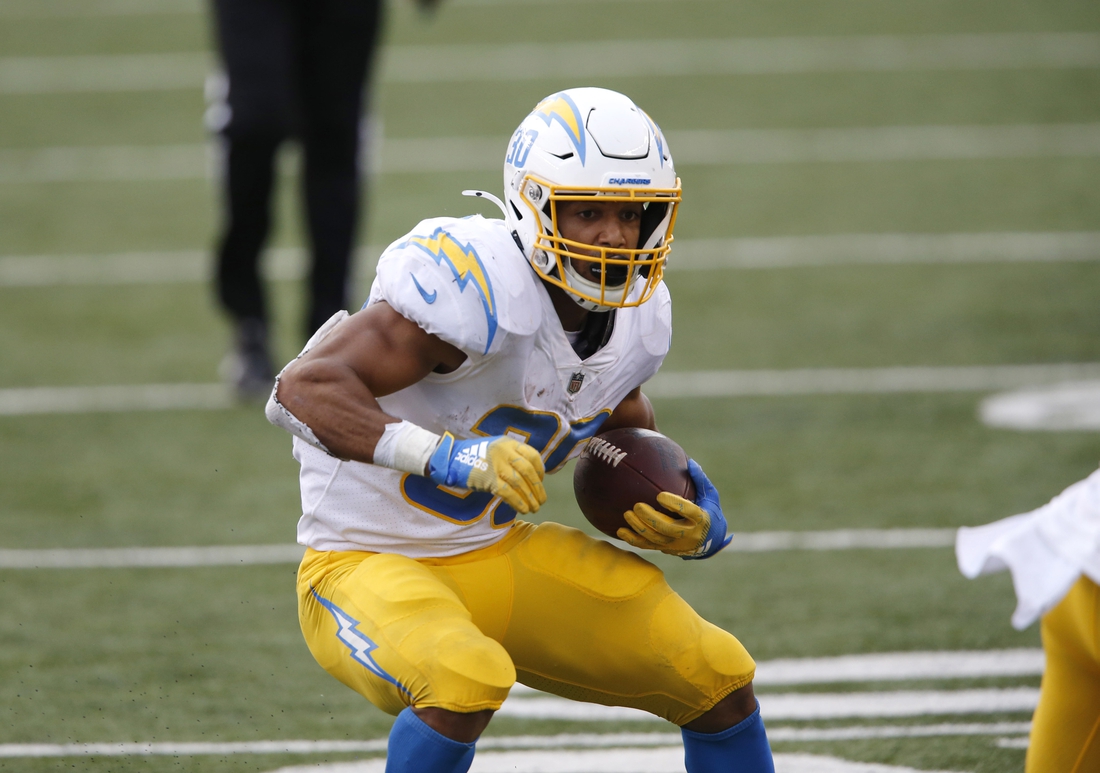