Keystone State lawmakers set the table for legal Pennsylvania sports betting last October. But even though the Supreme Court struck down the Professional and Amateur Sports Protection Act (PASPA) in May, Pennsylvania likely won’t be among the first wave of states to have licensees begin taking wagers, or it may trail along in the wake. It may be better to get things right than get them first, but the state’s 2017 enabling legislation created some formidable hurdles within Pennsylvania’s sports betting structure that key stakeholders have called to be revisited.

Rhode Island passed a law legalizing sports betting in late June and the new law includes an explanation of how sports betting profits will be split between the state, gaming operators and the state’s two casinos, both of which will offer sports betting. The state lottery will run sports betting in the state. So, where is Pennsylvania in all of this? Going nowhere fast.
Zero Potential Licensees Have Applied for a Pennsylvania Sports Betting Certificate, While Mississippi and West Virginia Have Seen Multiple Applicants.

The Pennsylvania Gaming Control Board (PGCB) rolled out temporary regulations earlier this summer, but not a single operator has applied for a sports betting license. Potential gaming operators have not been shy about telling the state that it has made the prospect of doing business there all but impossible.

Pennsylvania’s law calls for a whopping $10 million application fee and a combined 36 percent tax rate (34 percent state plus 2 percent local). For comparison, that’s 100 times the initial licensure fee of $100,000 in both West Virginia and New Jersey. On the tax front, New Jersey has an 8.5 percent tax on sports wagering revenue at casinos and 13 percent for online wagering, and West Virginia will levy 10 percent on both. Nevada’s rate is 6.75 percent.

“PNG first notes that the $10 million license fee and 36% tax rate established in the Gaming Expansion Legislation are the highest in the world and may make it impossible for a casino operator to make any return on its investment capital,” Penn National Gaming vice president and general manager Daniel Ihm wrote in his company’s response to the state’s temporary regulations. “Based on the tax rate and the fact that, on average, 95 percent of sports wagers are returned to winning bettors, PNG estimates it could lose approximately 40 cents on every $100 wagered on sporting events.”

Penn National owns the Hollywood Casino at Penn National Race Course in Granville, Penn. The company declined to expand on its written comments.

Potential Operators Have Called the Sports Betting Landscape in Pennsylvania ‘Not Economically Feasible’ and Say They Will Lose Money.

In addition, Greenwood Entertainment, which owns the Parx Casino in Philadelphia, said that requiring a slot machine licensee to pay the $10 million fee is “not economically feasible” while the National Football League — an unlikely ally — also weighed in, saying “the statutory operator licensing fees of $10 million and 34 percent tax rate on gaming revenue may render legal market participants unable to effectively compete.”

The PGCB does not control the tax rate or application fee — that is strictly the purview of lawmakers.

“We don’t legislate, we regulate,” Doug Harbach, director of communications for the Pennsylvania Gaming Control Board, told Sports Handle. “Our job is to put together the regulations and let the chips fall where they may.”
The PGCB is doing just that. The temporary regulations have been open for public reply for some time, and the board’s goal was to pass the temporary regulations — which could stand for up to two years — during one of its two summer meetings, the next of which is July 18.
In addition, the PGCB on Wednesday officially began accepting applications from potential sports betting operators (for example, Paddy Power BetFair or FanDuel, which may run a sportsbook on behalf of a casino), manufacturers and suppliers of equipment or products that may be used in sports betting.
According to Pennsylvania law, there is no deadline to apply for one of the state’s 13 sports betting licenses — one each for the 12 existing casinos plus one for a new property that will be opened in Philadelphia. But it does seem curious that while operators in other states are moving briskly, things in Pennsylvania are stalled.
“When I ask internally with the people who handle in our licensing area, there doesn’t seem to be a lot of concern, it’s just a matter of timing,” said Harbach. “We haven’t approved all of the regulations yet, so I think there is some holdup on that. My understanding is that there are still some casinos that are putting together partnerships before they petition us.” 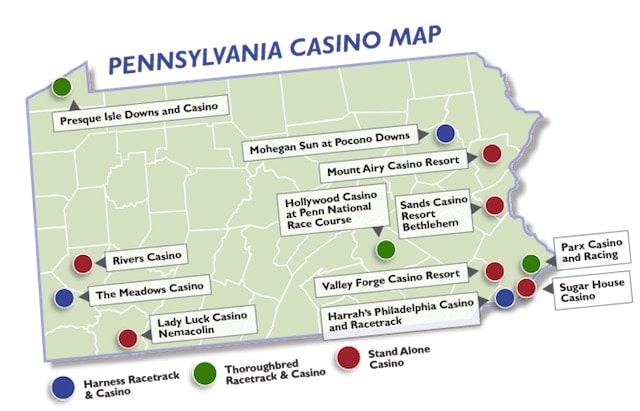 And what happens to the licenses if all casinos don’t apply for them? According to the law, they would go unused, as the licenses are designated strictly for casinos. An operator that does not have a brick-and-mortar location cannot apply for a license.

Casino companies like Greenwood Entertainment and Penn National have been very direct about the situation in Pennsylvania. The American Gaming Association, which has members across the country, won’t comment on any state specifically, but its public stance is that states with high taxes and fees ultimately don’t make good business partners.

“States and sovereign tribal governments should focus on the customer experience and empower licensed, regulated operators to offer a competitive product that protects consumers,” the AGA said in a statement. “High tax rates hinder the legal market’s ability to compete with, and shut down, illegal sports betting operators who pay no U.S. taxes and are largely unregulated.”
That said, it is impossible to know if any of Pennsylvania’s existing casinos will bite the bullet and pay the $10 million application fee. As many have the opportunity to open sportsbooks in other, friendlier locations, it seems unlikely, though it would only take one casino making application to change the landscape.