The New Mexico Lottery Board on Tuesday voted to approve a game linked with the outcome of sporting events, the Santa Fe New Mexican reported. The game will mark the second venture for an entity in New Mexico to offer sports betting after the Supreme Court struck down the Professional and Amateur Sports Protection Act in May. Just last month, the tribal-owned Santa Ana Star Casino & Hotel, with USBookmaking as its operator, launched a sportsbook.

Though details of the new lottery game were not made public, it’s likely it will involve parlay wagering, similar to Delaware’s sports lottery. In such a game, players must select the winners of at least three sports events and select each one correctly in order to win.

The driving force behind developing a sports-related lottery game is to generate more money for education, which the lottery funds. Lottery CEO David Barden told the Santa Fe New Mexican that the new game could produce $30 million a year, with $9 million to be directed to the lottery’s college tuition assistance program.

The post 7 Parlay Bets That Overcame Long Odds And Paid Big appeared first on SportsHandle.
Ten-leg parlays or more are the sports betting equivalent of the the New York State Lottery slogan, “Hey, You Never Know.”
Of course to a much greater extent, sports bettors control their own destiny, even with long shot exotics. But rarely do big-payout parlays actually hit and they favor the house in the first place, which is why we listed playing long shot parlays among the most common “beginner” mistakes.
Still, for many recreational players, a long parlay ticket is just entertainment and an expected strikethrough on the ledger. And, well, you never know! Sportsbook lounges and mobile software has to get financed somehow.  So with some mild jealousy and lot of admiration, let’s explore some of the luckiest, craziest, odds-defying multi-leg parlays that cashed.
Parlay Bets Paying Big!: Longshot NFL Parlay Bets and Others That Struck for Some Awesome Paydays. 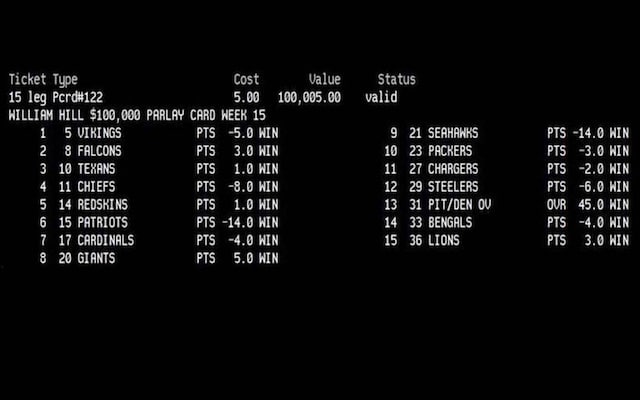 During the 2015 NFL season, novice sports bettor Tayla Polia won a 15-leg NFL parlay (above), according to CBS Sports. Polia beat 20,000-to-1 odds when she cashed in her $5 ticket for a $100,005 payday. She successfully called 14 NFL games against the spread and nailed one “over” as well (Broncos-Steelers combined for 61 points).
Polia initially thought she had lost her bet when the New York Giants fell to the Carolina Panthers by three. Fortunately for her, she had taken the spread — Giants +5. The closest game on the ticket ended up involving the Steelers, who beat the Broncos 34-27 in that shootout. That spread was Steelers -6. Polia 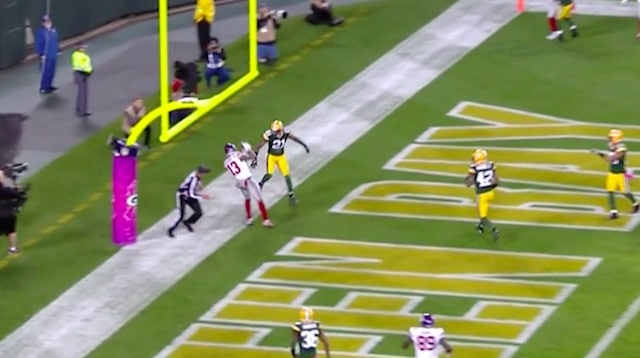 Over to ESPN sports business reporter Darren Rovell’s feed (we’ll be going back there) for Week 5 of the 2016 football season, which treated one bettor very nicely on a 12-leg parlay victory. Fortunately for the bettor, s/he got the Giants with the hook at +7.5 for the last leg of the parlay, and needed every half point. The Giants trailed the Packers 23-9 when the Giants took possession with under seven minutes left in the game.
Eli Manning and the Giants strung together a 10-play drive from their own 37 that culminated with an 8-yard touchdown pass from Manning to Odell Beckham Jr., which OBJ brought down with a toe tap in the VERY back of the end zone. As with all scoring plays it went under review (scary) and the score stood, preserving a 23-16 Packers win in the final “W” to make the parlay:

On Dec. 2, 2017, one bettor correctly called 12 football games — college and pro — against the spread. The wager was made at the Sands Regency in Reno, Nevada.  The bettor hit eight of 16 NFL games played during Week 13, and successfully avoided two trap games when the Eagles (10-1) lost to the Seahawks at Seattle (7-4), and the Steelers (9-2) won but did not cover against the Cincinnati Bengals (5-6).

As most of these types of parlays go, this winner required some dumb luck. The Titans were favored by 6.5 at home against the Deshaun Watson-less Texans. Tennessee led 17-13 with under a minute and only needed to run the ball (or even kneel) one more time to nearly salt the clock completely… when running back Derrick Henry took a pitch on a 3rd-and-5 and ran 75 yards to the house for a touchdown, giving Texans backers an incredibly bad beat and helping this parlay bettor here to an incredible payday.

This past Super Bowl certainly did not lack excitement as Nick Foles and the Philadelphia Eagles rolled past the New England Patriots to secure the Eagles’ first Super Bowl victory in franchise history.
Foles, the Eagles and people who attended the parade and got the opportunity to see Jason Kelce’s legendary celebratory address, weren’t the only winners. An unnamed bettor beat the house with this 9-leg Super Bowl special parlay:

Here is a $15 9-Leg #ParlayCard that cashed for $6,000 at the William Hill Sports Book inside @winnemuccainn when #FlyEaglesFly won #SB52

The ticket cost $15, and was cashed in for $6,000. The bet included mostly prop bets, in which the bettor foresaw a defenseless shootout speckled by odds numbers. The final score of 41-33 meant both sides finished with an odd-numbered point total, sealing the deal.

Baseball is one of the most unpredictable sports to wager on. There is value to be had but the season is an absolute slog, great pitchers have bad days, bloopers find empty spaces, and so it goes. This lucky bettor took four MLB sides and on the same games, four totals — all unders.

Jon Niese and the Mets shut out the Giants 3-0. Buehrle and Sale both pitched complete games in a 4-2 ChiSox victory. Cards-Cubs went scoreless until the 7th inning when St. Louis bats woke up and worked the Cubs bullpen in a 6-0 win. And the Twins and Orioles actually got knotted at 2-2 and went into extra innings — always cause for concern. But in the bottom of the 10th, Twins second baseman Brian Dozier took Tommy Hunter deep for a game-winning two run homer. This bettor walked away with $115,971 on a $500 wager.

In 2016, an unnamed sports bettor struck gold by winning the progressive jackpot on a 15-leg basketball parlay at William Hill sportsbooks in Las Vegas. A progressive jackpot means the total pot rolls over until someone wins, then the total pot gets reset.
This lucky winner took home $305,375 on a $5 bet. The bet included college basketball teams such as: Mississippi State, Stanford, Texas, Gonzaga, Utah, Purdue, Vanderbilt, Middle Tennessee, California, Arkansas, Ohio State, and Wisconsin on both Saturday and Sunday. On that same Saturday s/he survived a major scare with Golden State Warriors, who needed a late foul and overtime to cover against OKC.
On the ensuing Monday, the final bet was Kansas over Texas, and Kansas won easily, (86-56). Michael Grodsky, William Hill’s director of marketing, told the Las Vegas Review-Journal that the bettor played it safe and hedged an unspecified amount on that final Monday college basketball game.
The vast majority of us will never be this lucky. These wins stand atop piles of hundreds of thousands that were “so close” or “one leg away” or otherwise imperfect, which is the natural course of these things. But when luck does strike, it’s only right to tip a hat to our fortunate comrades.