Click here for my playbook breakdowns on the NFP "U" homepage.

Click here for a chalkboard look at the base NFL run game (Pro Set).

The Pistol offense and the 49ers. We all know that leads to talk of the Read Option (Zone Read) and QB Colin Kaepernick. However, let’s not forget about the base run game. The same schemes we see out of a Pro Style system (Power O, Counter OF, Lead Open, Trap, etc.) show up in Jim Harbaugh’s playbook from the Pistol alignment. 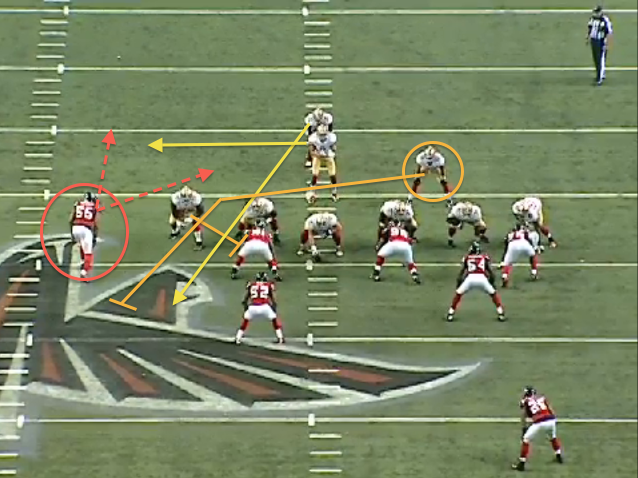 The 49ers run the Read Option out of their Regular (2WR-1TE-2RB) and Ace (2WR-2TE-1RB) personnel from a 2-back Pistol alignment. Ride the RB through the mesh point, wrap the F/H-Back up through the hole and read the end man on the line of scrimmage (DE in 4-3, OLB in 3-4). 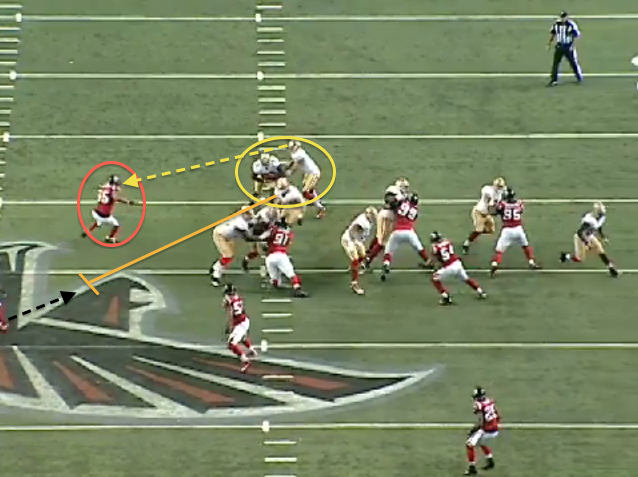 Look at Kaepernick’s eyes. He is reading the path of the DE. And as we all saw in the NFC Championship game, the Falcons kept their DEs up the field to play the QB. This is an easy read for Kaepernick on the give with the F/H-Back fitting up on the force player (Mike Backer/SS). 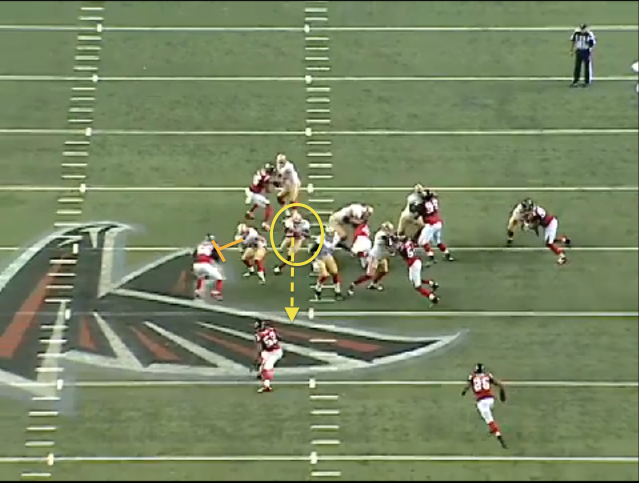 A clear running lane for Frank Gore to square the pads, get vertical up the field and finish off a productive gain. 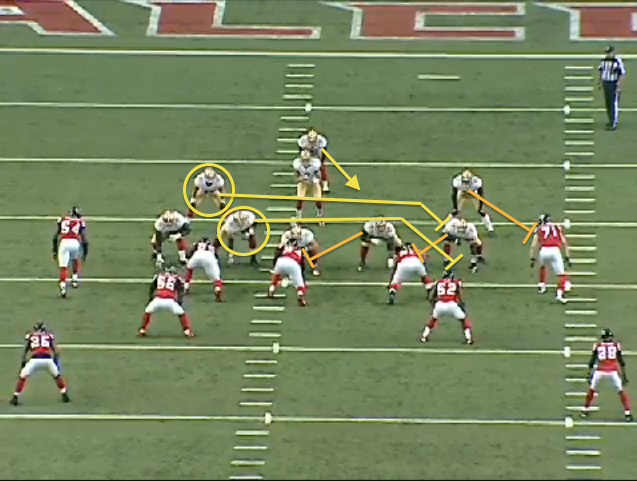 Same blocking scheme you see from a Pro Style system with the 49ers getting the kick-out block from the TE in the “Diamond” alignment. The open (weak) side guard pulls with the F/H-Back working to the closed (strong) side of the formation. 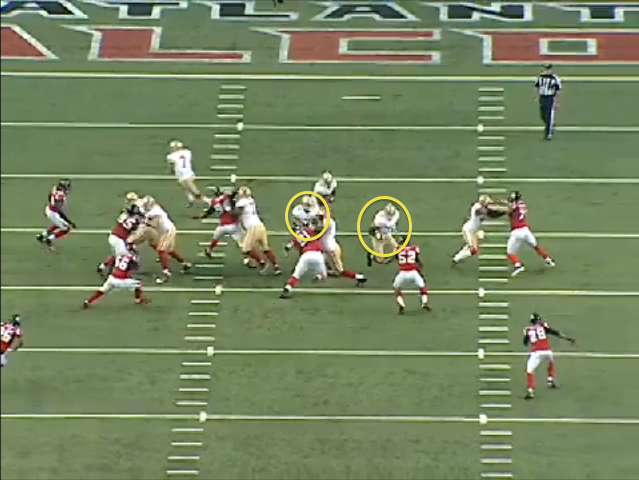 With TE Vernon Davis kicking out the edge support, Gore can follow the blocking path of the weak side guard and the F/H-Back. Let the play develop and pick a lane.

Because of the safety’s entry point into the run front, Gore cuts this play back inside of the guard and picks up positive yardage. 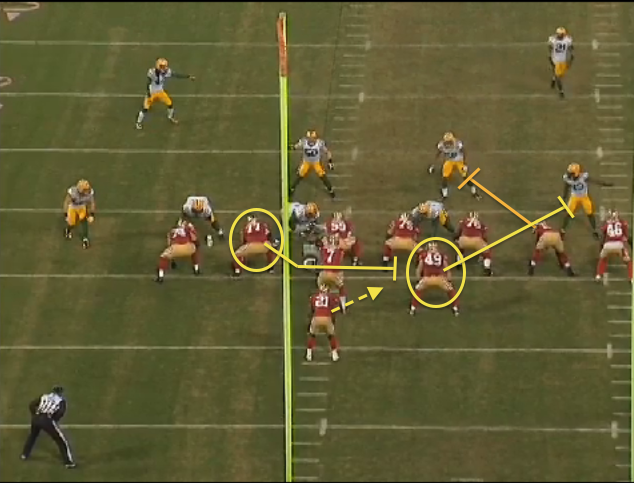 Think of running the Power O out of a Strong I alignment with Tank personnel (1WR-2TE-2RB) for Pro Style teams. The Niners start in a “Diamond” look, use short motion to create a “big wing” set (2 TEs) and run the Power O from the Pistol. Pull the open side guard and kick out with the F/H-Back. 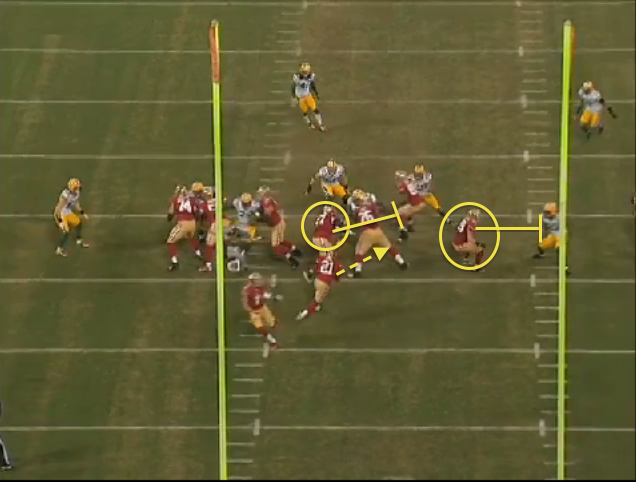 With the Y TE (on the line TE) working up to the inside linebacker and the “move” TE releasing to block the SS (arc release), the FB is going to kick out the closed side OLB (BOB O=Back on Backer). That leaves the open side guard on a path to work through the hole or block the first opposite jersey that shows to the play side. 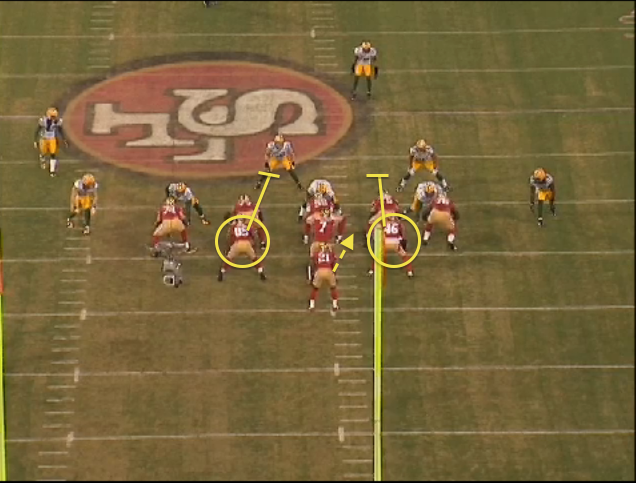 Why can’t you run the Lead Open out of the “Diamond” alignment? It’s the same blocking path if you were to run this play out of the straight I, Weak I, Power I, Triple I, etc. With Ace personnel on the field, both TEs will work up to the inside linebackers. A base downhill scheme. 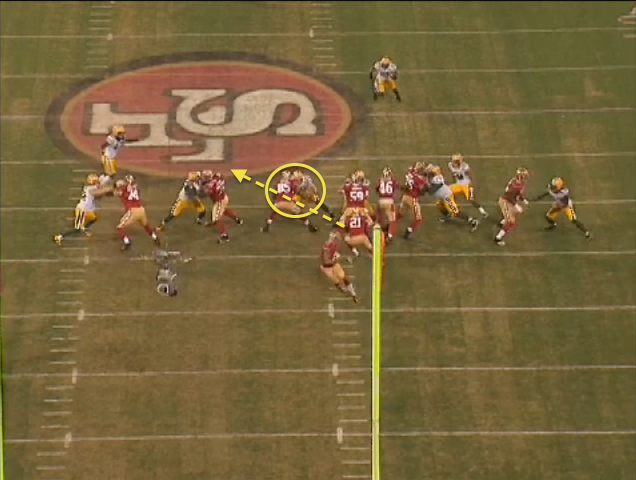 Gore cuts this ball back and follows Vernon Davis up through the hole. The idea is to force the secondary to fill vs. the run game and tackle. That’s five to six yards before contact if the SS isn’t quick with his run/pass keys. 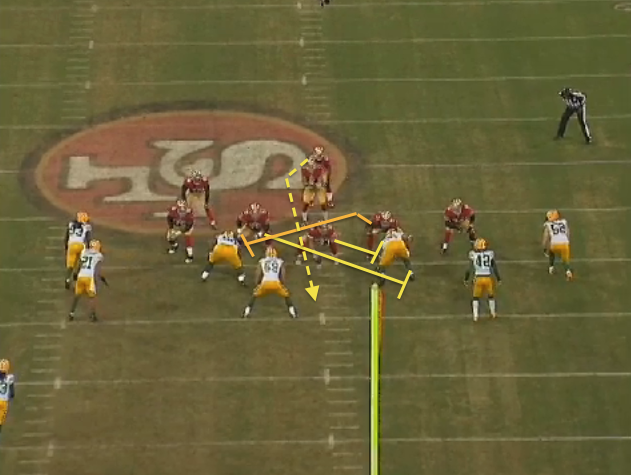 The 49ers run the “Wham” play to trap the Nose/DT out of their one-back alignments and this is similar when we look at the inside blocking scheme. Block down with the center and the closed side guard with the open side guard trapping the 3 technique DT vs. this nickel defensive front from Green Bay. 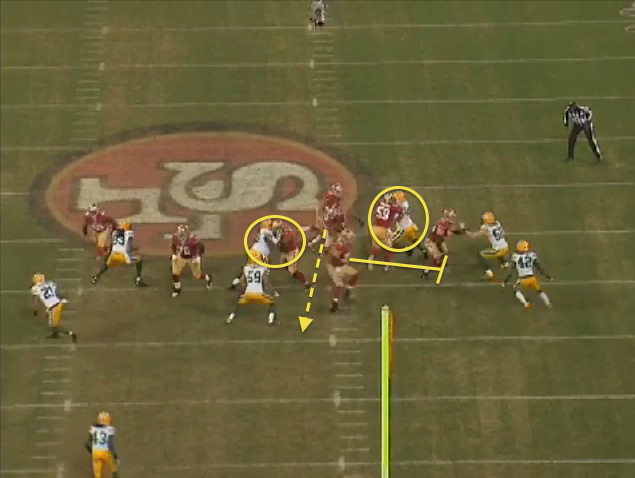 Remove both DTs with the trap and allow RB LaMichael James to get through the hole. And with a missed tackle, this turns into an 11-yard run. Not bad for a simple trap scheme.

What did I learn?

This Pistol offense is new to me. I didn’t see as a player back in the Big Ten or during my time in the NFL. However, I learn something every time I turn on the tape. With Kaepernick, the Read Option is always a threat. I get it. But after watching tape today, I’m more focused on the blocking angles and the path of the RB the Pistol offense creates. That’s tough to defend.