Playbook: Breaking down the 'Levels' concept

Click here for an example of the “Levels” concept from a stack alignment.

Let’s spend some time this weekend talking Xs and Os by looking at an inside breaking concept that can beat Cover 1 (man-free) and Cover 2 (or Tampa 2). A route that was run consistently (with production) by Peyton Manning’s offenses in Indianapolis.

Check out the diagram up on the chalkboard and then we will get into some coaching points. 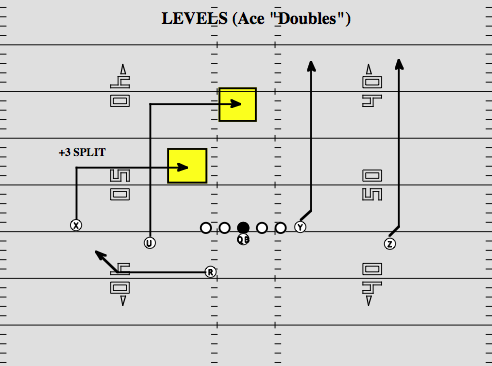 - Start with the closed (strong) side of the formation. Here, I have the Y (TE) on the inside seam and the No.1 WR (Z) running the 9 (fade) route. Clear out (or occupy) the top of the secondary to the closed side and go to work on the “Levels” concept. The No.1 WR to the open (weak) side (X) will take a plus-3 split (also called an “over-split) and the run the “Smash” concept with the 2nd TE (U) on the intermediate dig route. Two levels for the QB to read.

- Why is the pre-snap alignment of X important from a defensive perspective? It tells you a story. Remember, he is aligned there for a reason on the “Levels” concept: to create some room. Working against Cover 2, the QB wants to target the X receiver (think 3rd and 2-6 situation) and make the throw before the Nickel or Will Backer (“seam-hook” players) can drive to the ball.

- I mentioned Manning and the Colts offense above because they used to beat defenses with this route every Sunday. Keep Ace personnel on the field; remove TE Dallas Clark from the core of the formation as a slot receiver (U) and target WRs Reggie Wayne or Marvin Harrison (X) underneath on the “Smash.”

-What about Cover 1? Think defensive leverage here in man-free. Different than playing Cover 0 (align with inside shade), the DBs (or LBs) in coverage will maintain outside leverage and are coached to funnel receivers to the middle of the field. If the U or X creates some separation on the release or at the top of the route stem, they can work back to the middle of the field with the defender in a trail position.