The ACC Football Kickoff began on Sunday and continued on Monday at the Grandover Resort in Greensboro, N.C., as the road to the kickoff of preseason camps continued with the press gathering for commissioner John Swofford's league.

Here are some notes from the two-day event: 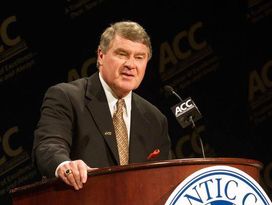 US PRESSWIREJohn Swofford called this past year a “monumental one” for the ACC.

- Swofford speaks: The commish addressed the media about a variety of topics, including the state of the conference. At his opening presser, he said the league "is playing the toughest non-conference schedule of any league in college football," and he may have a point. ACC teams are playing a very good non-league slate, with Virginia Tech battling Alabama at a neutral site, Clemson playing SEC powers Georgia and South Carolina, and Boston College hitting the road to play USC, to name a few contests. The question, though, is how well the ACC teams will fare in those games. The league's members will have to win some of those contests to earn national respect. We'll find out right away if the league is up to the challenge as North Carolina opens the season against South Carolina on the opening Thursday of the season. Could the league ride the momentum of Clemson's win over LSU last year in the Chick-fil-A Bowl?

- What's ahead: Of course, the full slate of head coaches were available for interviews, including first-year ACC coaches Steve Addazio (Boston College), Dave Doeren (NC State), Paul Chryst (Pitt) and Scott Shafer (Syracuse). While conference realignment and expansion will never fully hit the backburner, there's no question that most everyone associated with the ACC has never felt stronger about the league. With new members Syracuse and Pitt as well as Louisville next year and Notre Dame as a partial member (Maryland will depart for the Big Ten in 2014), the conference has never been more prepared to be a strong football entity with its secured grant of rights and strong bowl lineup. Swofford called this past year a “monumental one” for the ACC. “It's hard to believe the many milestones that have taken place since we were in this same room at this same event last July,” he said. “As we look to the future, we do so with great anticipation in this league. The composition of the long-term membership of the ACC has never been stronger.” But, again, can the league make noise on the field against major non-conference opponents?

- Notre Dame: While the Fighting Irish will not be a full member and will not arrive until next year, Swofford said that if ND decides to join a football conference before 2027, the language in the contract states that it must be the ACC. Nationally and even within some ACC circles, the Irish have been criticized for not fully committing to the league. But Swofford maintains that he is pleased, as well as most people in the league, that Notre Dame is a part of the ACC under these current terms.

* The 120 media members picked Clemson to win the conference championship. The Tigers are starting to emerge as a darkhorse pick to play for the BCS national title. Meanwhile, Florida State didn't get much love, as the defending ACC champions received just 15 first-place votes.

* Clemson quarterback Tajh Boyd was picked to repeat as ACC player of the year, while Miami (FL) running back Duke Johnson was second.

* ACC officiating coordinator Doug Rhoads held a seminar where he talked about a new rule that calls for an automatic ejection for hitting a player with the crown of the helmet or making contact with a defenseless player. There were 190 such incidents last year (16 in the ACC).

Be sure to check out two pieces from Dan Wolken of USA TODAY Sports. The first is about Maryland head coach Randy Edsall supporting the Ed O'Bannon lawsuit vs. the NCAA. And the second is about Swofford saying that the next six months are critical to the NCAA's future and that he expects changes by January.