The Bo Pelini era ended at Nebraska on Sunday, as Cornhuskers athletic director Shawn Eichorst relieved the head coach of his duties after seven seasons. Pelini recorded at least nine wins in each year, and the Huskers went 9-3 this fall. But despite compiling a 67-27 overall mark in Lincoln, Pelini failed to register enough standout wins, with the Huskers struggling against Top 25 teams and too often failing to close out close games.

While Pelini supporters will cite the consistent nine-win seasons as a reason for him to stay, Frank Solich was fired from Nebraska after a nine-win campaign. However, Solich at least won a Big 12 title, made a BCS title game and won a Fiesta Bowl. Pelini, on the other hand, just didn't advance the program far enough in the eyes of the administration, has been a bit combative at times and oversaw a team that suffered through too many lapses both on defense and offense.

So where do the Huskers turn for a replacement? Here are some coaches that Eichorst could approach about the opening.

Scott Frost: The Oregon offensive coordinator is, of course, a former star quarterback for the Cornhuskers during the very successful Tom Osborne era. The Lincoln native would instantly send a wave of excitement through the fan base, and he'd be the first major assistant from a Chip Kelly staff to get a head gig. The Huskers program was once known for its rushing prowess. Imagine an up-tempo, high-octane offense causing problems for opposing Big Ten defenses. Frost is well-respected by Osborne, but he doesn't have head-coaching experience at this level. Would the Huskers roll the dice on that lack of head experience as they did with Pelini? Frost is a PR dream for Eichorst, and he's ready for a shot.

Craig Bohl: The 56-year-old worked wonders at North Dakota State, turning it into an FCS powerhouse (winning three national titles) before taking the head job at Wyoming. The longtime former Huskers assistant told me before the season began that he had been contacted for other jobs in the past but wanted to wait for the right fit. Laramie is a place that he knew would be a great fit. And there's no doubt that a return to Lincoln would be a fit as well. The former Huskers defensive back's physical style of play would be welcomed by GBR Nation. But would his age be an issue? Don't let the 4-8 debut mark with the Cowboys fool you. Bohl is still a stud candidate. 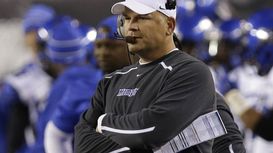 Justin Fuente is one of the rising head coaches in the country.

Justin Fuente: The Memphis head coach is going to get a big job soon, as he has done a marvelous job in a short amount of time with the Tigers. He led the program to a 9-3 season and an AAC title (its first league title since 1971) one year removed from a 3-9 campaign. He was a rising assistant under Gary Patterson at TCU, and he has proven to be a very good head coach. He likely would bring coordinator Barry Odom to run the defense as well, and one coaching carousel expert told me that Odom is one of the most underrated defensive minds in the college game.

Tom Herman: The Ohio State offensive coordinator has strong ties to the state of Texas after being a graduate assistant with the Longhorns and coaching at Sam Houston State, Texas State and Rice. So getting recruits from the Lone Star State is always a good thing for a program like Nebraska that does not have a very strong recruiting base. Herman was handpicked by Urban Meyer when the former Florida coach took the head job with the Buckeyes, and he has worked wonders with an offense that lost starting quarterback Braxton Miller before the season. Herman will be given the chance to be a head coach soon.

Greg Schiano: He turned down the Michigan job once before and is a likely target for the Wolverines this time around when Brady Hoke gets his expected dismissal. So Nebraska would have to act fast if it really wants Schiano. The former Rutgers and Tampa Bay Buccaneers head coach has spent this season away from the sideline after being let go by the Bucs, so he would be refreshed and ready to tackle a job that would be much less taxing than the work he put in during the remarkable turnaround he performed at Rutgers. He may ultimately want to get back in the NFL, but his ability to recruit and motivate young players would make him a great fit at most schools.

A quick note: Lance Leipold reportedly accepted the job as new head coach at Buffalo, but I thought he could have been an intriguing wild card candidate for the Nebraska opening. The 50-year-old Wisconsin–Whitewater head coach led the Warhawks to the Division III national title five times since 2007, and the team was the runner-up in 2008. He went 101–6 at UW-Whitewater, where he was an assistant when Eichorst was team captain in 1990. Leipold is a former Huskers assistant who would have been an underrated, bold and potentially very good move. Nonetheless, the MAC East must now take notice of the Bulls.