Purdue loses Marve for rest of the season

Purdue’s worst fears were realized Thursday when the team’s orthopedist confirmed that Robert Marve tore the ACL in his left knee, knocking the quarterback out for the rest of the season.

The Miami transfer suffered the injury in the first half of last week’s 31-20 loss to Toledo. 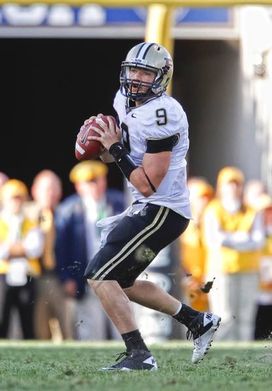 ICONRobert Marve's first season at Purdue has come to an abrupt end.

“Robert Marve is a big part of our football family, he has worked extremely hard to be the great player that he is and our heart goes out to him,” Purdue head coach Danny Hope said in a statement. “Boilermaker nation will rally behind him with all of its support through this tough time.”

It’s an especially tough break for Marve, who tore the same ACL last summer. He was praised throughout the offseason for his increased maturity and his dedication to getting better as a signal caller.

The junior completed 67 of 99 passes for 512 yards with three touchdowns and four interceptions this season. He added 32 rushing yards and a score.

The Boilermakers have been decimated on offense this season. Keith Smith, the Big Ten’s leading receiver in ’09, tore the ACL and MCL in his right knee two weeks ago and is out for the season. And projected starting running back Ralph Bolden suffered a torn ACL in his right knee early in the offseason. He is unlikely to return this year.