Coming off the best season of his four-year career, it’s not surprising to see that wide receiver Donnie Avery has found a new home approximately 24 hours into the start of the free agent period. 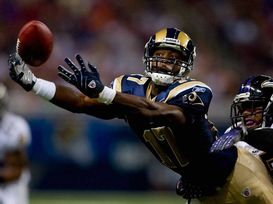 After beginning his career in St. Louis with the Rams, Donnie Avery returns to Missouri to join the Chiefs.

According to Adam Schefter of ESPN, Avery has come to terms on an agreement with Andy Reid and the Kansas City Chiefs. Details of the contract weren’t immediately made available.

Avery made some noise during his first two professional seasons with the St. Louis Rams, hauling in 100 passes for 1,263 yards and eight touchdowns in 31 games. But the 28-year-old’s numbers took a hit during his 2011 stint with the Titans, as Avery recorded only three receptions for 45 yards and one score in eight outings.

A new friendship was formed with Colts rookie quarterback Andrew Luck in 2012, which resulted in the best stat line of Avery’s four-year career (60-781-3).