Mark Sanchez isn’t good enough, Jay Cutler throws too many interceptions, Ben Roethlisberger is suspended for the first four games of the season and the Packers offensive line surrenders too many sacks.

A lot has changed since August.

Shortly after Sanchez and the Jets put the finishing touches on a 28-21 upset win over the heavily favored New England Patriots, oddsmakers around the globe went to work establishing lines for the four remaining teams to win the 2011 Super Bowl.

But before we get to that, lets flash back to August when the preseason Super Bowl odds were released and examine how the four teams still standing got to this point: 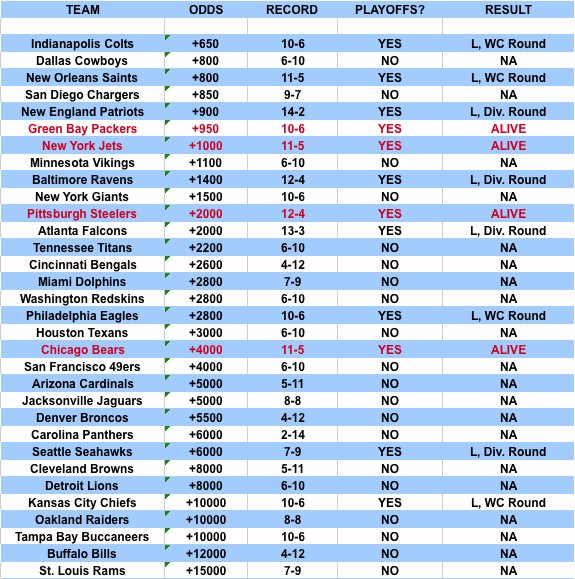 Fun fact: The five teams with the best preseason odds to win the Super Bowl combined to win zero playoff games this season.

The rundown: After posting a 23-25 combined regular season record and failing to make the playoffs in each of the previous three years, general manager Jerry Angelo and head coach Lovie Smith found themselves on the hot seat entering 2010. The Bears had ranked 17th or worse in total defense from 2007-2009, prompting Angelo to break out the checkbook for prized free agent defensive end Julius Peppers. 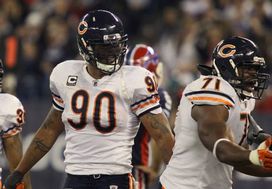 ICONFree agent acquisition Julius Peppers is a big reason why the Chicago defense ended the season in the top ten.

In addition, Angelo and Smith brought in offensive coordinator Mike Martz in an attempt to protect their hefty 2009 investment in quarterback Jay Cutler, who threw a league-high 26 interceptions last season.

Fast forward to today: The Bears finished the 2010 regular season ranked ninth in the NFL total defense (314.3 yds/gm) and fourth in scoring defense (17.9 pts/gm) while Cutler did a much better job protecting the football, throwing just 16 interceptions in 16 starts. After dropping a 17-14 heartbreaker to the Washington Redskins on October 24, the Bears won seven of their final nine games to clinch the NFC North and earn the No. 2 seed in the NFC. Chicago took down Seattle 35-24 on Sunday to advance to their first NFC Championship game since 2006.

The rundown: After overachieving in the eyes of many by earning a trip to the AFC Championship game last year, Rex Ryan’s New York Jets opened the 2010 regular season with the seventh-best odds to win the Super Bowl. But many experts weren’t taking the bait for fear of looking bad by backing a second-year, turnover-prone quarterback coming off a rookie season that ended with a QB rating of 63.0 (28th in NFL).

Ryan and Sanchez are headed back to the AFC Championship game.

Having lost three of their final five games to conclude the regular season (including an embarrassing 45-3 blowout loss at New England on December 6), the Jets found themselves in an AFC Championship game rematch at Indianapolis to open the postseason.

Fast forward to today: The Jets held future Hall of Fame quarterbacks Peyton Manning and Tom Brady to a combined 37 points and committed just one turnover and six penalties en route to back-to-back upset wins for a second straight trip to the AFC Championship game.

The rundown: Outside of Sports Illustrated’s Peter King, the Pittsburgh Steelers were nothing more than an afterthought in the opinion of many entering the 2010 regular season, as Pro Bowl quarterback Ben Roethlisberger opened the year serving a four-game suspension for a well-publicized incident in a Georgia nightclub.

Roethlisberger and the Steelers sent the Ravens packing.

But thanks to the efforts of backup quarterbacks Charlie Batch and Dennis Dixon, not to mention the stellar performance of one of the NFL’s elite defensive units, the Steelers opened the year 3-1 and went on to win six of their final seven games en route to their third AFC North championship of the last four years. Once again, Dick LeBeau’s defense set the tone as the Steelers finished the season ranked second in the NFL in total defense (276.8 yds/gm), first in rushing defense (62.8 yds/gm), first in scoring defense (14.5 pts/gm) and third in turnovers (35).

Fast forward to today: After trailing 21-7 at the half against the Baltimore Ravens on Sunday, Pittsburgh went on a 24-3 run to earn a thrilling 31-24 victory over their hated rivals. With the win, Roethlisberger moved to 9-3 lifetime against the Ravens, which includes seven-straight victories dating back to 2007.

The rundown: After smashing the Indianapolis Colts 59-24 in a nationally televised preseason game back in August, the majority of the experts around the country quickly jumped on the Green Bay bandwagon and proclaimed the Packers as their pick to win Super Bowl XLV. But the injury bug hit the Pack early in the year and contributed heavily to a mediocre 3-3 start to the season.

ICONHow did this guy not make the Pro Bowl?

To make matters worse, Mike McCarthy’s crew dropped back-to-back games to the Lions and Patriots in mid-December, putting Green Bay in danger of missing the playoffs with just two games left to play.

But dire situations such as the one Green Bay was facing late in the regular season are where the NFL’s elite perform at their best. Quarterback Aaron Rodgers completed 67.7% of his passes and threw for 633 yards and five touchdowns over Green Bay’s final two games (wins vs. NY Giants and Chicago) to lead the Packers to their second-consecutive trip to the postseason.

< strong>Fast forward to today: After defeating the Philadelphia Eagles 21-16 in the Wild Card Round, Rodgers went Supernova hot Saturday night at Atlanta, completing 31 of 36 passes for 366 yards and three touchdowns in a 48-21 ass-kicking of the Falcons.

If you were walking up to the counter of the Las Vegas Hilton sportsbook today, where would you put your money?