<p> After taking a look at the top quarterback and running back prospects for the 2014 NFL draft, we turn our attention today to the wide receiver and tight end positions.

CLICK HERE to check out our preseason QB & RB rankings.

Note: Our preseason rankings include seniors only. Underclassmen will be added once they declare for the NFL draft

1. Jordan Matthews, Vanderbilt – Many were surprised that Matthews opted to return for his senior season. He is a complete wide receiver who has the ability to be a No. 1 wideout in the NFL. 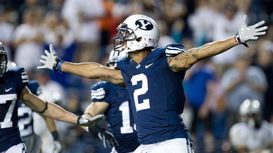 2. Cody Hoffman, Brigham Young – Hoffman is a big, physical wide receiver who use his body to shield defenders and catches the ball well.

3. Devin Street, Pittsburgh – We love Street’s size and playmaking ability, but the Panther standout needs to get stronger.

4. TJ Jones, Notre Dame – Jones will be Notre Dame’s best offensive player this year and should get a lot of chances to make plays while showing he could be a No. 1 wide receiver in the NFL.

5. Kevin Norwood, Alabama – Norwood is a big-time playmaker, but sometimes he disappears on tape. He’ll need to correct that this season to help his draft grade.

1. C.J. Fiedorowicz, Iowa – Fiedorowicz has the size and blocking ability you look for in a tight end, but he needs to make more explosive plays in the passing game.

2. Chris Coyle, Arizona State – Coyle is a great receiving tight end but lacks elite size and might have to transition to the H-back position in the NFL.

3. Arthur Lynch, Georgia – Lynch is a consistent player who has all the skills you look for in a tight end. He could move up the rankings this year with a quality senior season.

4. Jacob Pedersen, Wisconsin – Pedersen is a better athlete then people give him credit for and will be a focus in the passing game this year at Wisconsin.

5. Blake Jackson, Oklahoma State – Jackson was a junior college transfer last year and had a great season, averaging close to 20 yards per catch. This is a guy worth keeping an eye on this year.