Why the neck roll is going out of style

In the 1970s, 80s and 90s, gritty NFL players, like Jack Lambert, Will Wolford and — perhaps most famously — Howie Long, used to wear neck rolls, an old school, piece of equipment that permeated the league.

A white tube-like foam came around the back of Long’s neck with the two ends sticking out the front of the jersey like the tusks of a mastodon.

“It looks stupid,” said Howie’s son, Kyle Long. “I don’t know what the purpose of it was … He’s never been a guy that just tried to look cool.”

Although the Bears right guard did not go for his father’s trend, the Hall of Fame defensive lineman served as inspiration for a generation of fullbacks, linebackers and linemen, including Bears long snapper Patrick Mannelly.

“I just wore it in high school because I thought it looked cool,” Mannelly said. “I tried to look like Howie Long.”

Whether you think the neck pad looks ridiculous (like Kyle Long) or intimidating (Mannelly), the equipment is no longer in vogue in the NFL.

The Cowboy Collar, the curved, black polystyrene foam neck pad popularized by fullback Daryl Johnston, has fallen so out of favor that the company, McDavid, Inc., which invented it, plans to discontinue making it once its current inventory runs out (likely at the end of 2014).

“Over the last several years, what we’ve seen is a steady decline in sales,” said Richard Avis, the global director of McDavid’s sports medicine marketing. “We’ve decided to let (the Cowboy Collar) ride off into the sunset … It’s kind of an end of an era.”

In this new era, the NFL strictly enforces illegal contact and pass interference in the secondary, and hitting the quarterback in the head or below the knee results in a 15-yard penalty, making for a more passing-friendly, less run-intensive league. 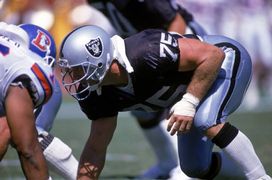 Spread offenses are all the rage. The power play is no longer an offensive staple, and fullbacks are an endangered species. A streamlined look is in; the larger shoulder pads of the 1990s are out.

“A lot of guys wanted to appear to be bigger,” Kyle Long said. “Nowadays people want to be compact, faster.”

Bushrod wore a neck roll in college at Towson — where he said he “looked crazy” —because he suffered a couple of stingers a game during his senior year, but he doesn’t wear one in the NFL, citing the discomfort of the pad.

Asked if the neck roll ever will regain its popularity in the NFL, Bushrod alluded to the decline in collisions in the running game, “Nope, (it’s) not the direction this league is moving.”

Despite the new trends, the injury that the neck collar was designed to prevent remains prevalent. A brachial plexus injury occurs when impact forces the head back or to the side, causing a stretching of the nerves and numbness sometimes called a burner.

While Matt Slauson blocked on a field goal attempt for the Jets in 2010, the Bills brought the house to try and block the kick. Slauson endured multiple burners, though he did not miss a game that season. He now wears a smaller version of the neck roll that Velcros to the inside of his shoulder pad, a handy piece of equipment for a pulling guard who often takes on a linebacker with a full head of steam.

Though Slauson wears the pad, he does so somewhat regrettably because it makes it more difficult to keep his head on a swivel and locate who is rushing the passer.

Eben Britton, who the Jaguars drafted in the second round of the 2009 draft, wore a Cowboy Collar at John Burroughs (Calif.) High — 70 percent of the reason was for style; 30 percent was because of a weak neck — but not as a lineman in the pros or collegiately at Arizona for the reason Slauson complained about.

“Playing O-line you need to be able to move your head around and look,” Britton said. “That really inhibits it.”

The original appeal of the neck rolls, though, had as much to do with fashion as the functionality.

Mannelly suggested having players wear them with throwback uniforms. Bears defensive end Julius Peppers smiled when it was broached that he should sport one to bring back the style.

“Times have changed,” Peppers said. “And guys are doing other things to look cool now.”