Why is Cover 2 being exposed in the red zone?

The “Tampa 2” defense in the NFL. How many times have we talked about the 5-under, 2-deep coverage here at the NFP? A core call for Lovie Smith’s defense in Chicago and a mainstay in every defensive game plan in the NFL.

However, there are multiple ways to beat Cover 2 (Flat-7, 4 Verticals, etc.), and once the ball crosses the 20-yard line, the Mike Backer becomes a target. Create the matchup that favors the offense.

Let's take a look at Tampa 2 on the chalkboard (drawn vs. Regular personnel in a Pro set). 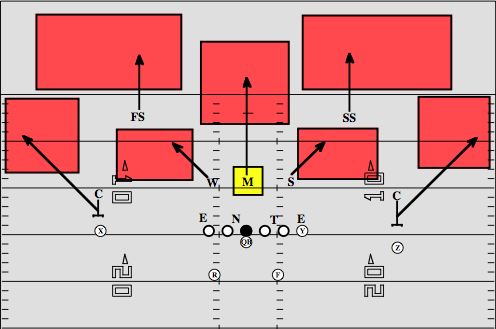 Take a look at these three examples (with video) that I broke down vs. Cover 2:

- Tom Brady vs. the Bucs
- Jay Cutler vs. the Vikings
- Sam Bradford vs. the Raiders

Here’s what we are seeing across the league vs. Cover 2…

Play action: Go back to the Brady and Bradford breakdowns. Force the Mike backer to step to the line of scrimmage—because that’s all it takes. And when a LB gets caught with his eyes in the backfield, this is an easy TD throw for an NFL QB.

Force the Mike to settle his feet: The linebacker is coached to open his hips to the passing strength of the formation and carry the inside vertical seam. But when you run the TE “shake” route (or any double move in the middle of the field), this will open up a throwing lane if the LB doesn’t play with the proper technique.

Align speed at No.2 or No.3: Think of what the Packers do in their empty looks in the red zone. Move Greg Jennings inside to matchup with the Bears Brian Ulracher in Cover 2. Run the post (or the inside seam) and win with speed. And with today's TEs (think the Saints Jimmy Graham from Sunday night), there is speed all over the field.

Run 4 Verticals: A classic Cover 2 beater and a tough spot for the Mike. Stretch the safeties and widen them off their landmarks (top of the numbers), leaving two verticals on the linebacker. Nasty inside the 20-yard line.

I am a firm believer in this defense and it was a core call during my own NFL career with St. Louis and Buffalo. However, the discipline required by the Mike Backer and the entire secondary is key to seeing any type of success. And NFL offenses are doing everything they can to expose it.