This week the first group of invitations to the annual NFL Scouting Combine went out. This initial group numbers about 250 players. The total number of players invited usually is about 335 players but it will be weeks before that final number is reached. In reality the players that received invitations this week are players who have completed their college season. The invited players who are in postseason bowl games won’t receive their invitations until after they play in their school's bowl game. Here are some questions and answers as to how the invitation process works.

Why an initial group of only 250 players? 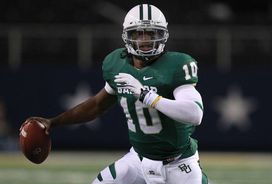 Will Robert Griffin III be an early entry into the NFL Draft?

How is the original group of invitees determined?

Each name is brought up individually by position and they are voted on. They have to receive a greater than majority vote (about seven votes) to get an invitation. Most if not all of the original 250 get the seven votes required.

How many underclassmen are invited?

That number is determined by the total number of underclassmen who enter the draft. That number can change from year to year, but usually numbers around 40-45 players. Like the seniors who are invited to the combine, this group is voted on by the committee. The vote usually takes place within a few days of when underclassmen who have declared for the draft becomes public.

How do the remaining players get invited?

After the underclassmen are invited the total number of invitations usually is somewhere between 290 and 300 players. That means that there is room to invite another 35-45 players. Out of that number comes the kickers, deep snappers and “throwing” quarterbacks. That number is usually about 15. After that, the players who received the highest number of votes who haven’t already been invited fill out the Combine roster.

Can a team lobby for a player to be invited?

Yes they can, but it really doesn’t do any good. The people that run the Combine try and keep the process fair and with all invitees voted on.

Does every player invited get drafted?

No, with the compensatory picks the usual number of players who get drafted is around 250. Every year there are 35–40 players who were not invited to the Combine that get drafted, so that means only about 210-215 of the invited players end up getting drafted by a club.

Why weren’t these payers invited?

There can be various reasons as to why they weren’t invited but usually it’s because they didn’t receive enough votes from the committee. This happens every year and many times it’s because not all the clubs have scouted the player during the season and he still is bit obscure to the scouting community. I know that when I was a Director of Scouting I loved it when a player we had a high grade on didn’t get invited. This is a competitive business and if I know something that some of the other 31 clubs don’t know then it’s to my advantage. The bottom line is you have to trust that your scouts have done a good job finding players.